Posted by miguel on Wednesday, 07 August 2013 in Animals 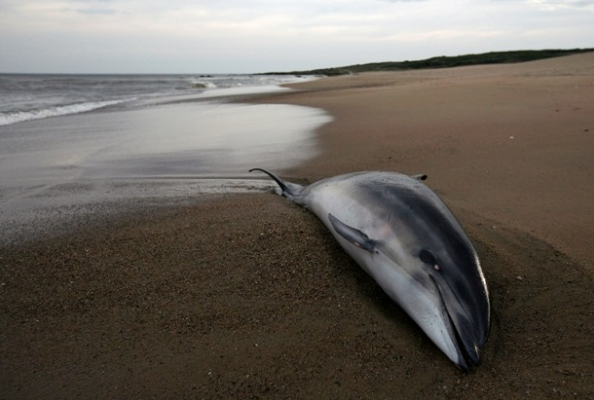 A Smithsonian museum scientist who dealt with the nation's largest dolphin die-off arrived Tuesday to help figure out what's killing dolphins in Virginia at a rate not seen in 26 years.

As of Monday, 16 dolphins had washed up dead in Virginia in August, bringing this year's total to 103. Almost half of the yearly count was found in July.

The stranding response team of the Virginia Aquarium & Marine Science Center believes it caught the developing epidemic early, largely because of measures put in place after more than 750 dolphins washed up dead on the East Coast in 1987. After three years of research, morbillivirus, similar to the agent that causes measles, was deemed the culprit.

"We think we're getting the very beginning of this event," said Charley Potter, marine mammal collection manager at the Smithsonian National Museum of Natural History. "I think we'd all like to see it be a minor hiccup and go away, but I'm afraid it's going to continue on until the animals migrate south."

Staffers at the aquarium have not pinpointed a cause of these deaths, but the epidemic a little more than a quarter-century ago left them with a slew of data and, more important, stranding response teams along the East Coast.

Potter and other members of the 1987 team are rotating shifts in Virginia Beach, performing necropsies and going over notes that led to the discovery of morbillivirus, a disease not identified before 1990.

On Tuesday, Potter watched as a volunteer cut into a young male dolphin that had washed ashore at Fort Story on Monday night and was picked up the following morning by the response team. Sorting through the collection of tissue, fluids and swabs, researchers are looking for similarities that can be linked to a cause.

The animal on the table still had his gray color, indicating that the corpse was still fairly fresh, a boon for those hoping to figure out what is causing the uptick in deaths.

"Some of the viruses are actually quite fragile. Once the host dies, they start to die," Potter said. "It's critical that we get to the animals as soon as they're on the beach."

The dolphin's blubber was thick, a sign of good health, and no obvious gashes were noted.

"We haven't seen any physical trauma that would indicate entanglements or sonar damage to the ear," said Susan Barco, research coordinator for the aquarium.

In the past, the use of midfrequency naval sonar has been linked to dolphin and whale deaths. But Ted Brown, a spokesman for the Navy's Fleet Forces Command in Norfolk, has said "there has been no change or increase in sonar use that could be related" to the recent surge.

Unlike the 1987 die-off and its Oceanfront strandings, these dolphins have mostly been found on the southern portion of the Chesapeake Bay, Potter said.

A majority of the animals stranded have been juvenile males, a trend that concerns Potter. Instead of the different sizes of dolphins found in 1987, the corpses Potter has inspected this time around have otherwise been robust.

"Many of them are seemingly in good body condition. Their lives have been cut short," he said. "Even if you disregard the animal welfare side, they're indicative of the health of the marine environment."

Despite the advances in science since the last epidemic, necropsy results will not be in for a while.

"We're looking at the genetics to see if we're dealing with the same population, and that takes months and months. It's a matter of weeks at a minimum," Potter said.

As the research trickles in, those watching the numbers fear that the problem could move southward as temperatures drop. Scientists from North Carolina are due to arrive next week in Virginia, and the favor may be returned in a couple of months.

"They came to help us, and if the time comes, we'll be there to help them," Barco said.