Posted by ESKCSG on Wednesday, 07 August 2013 in Fossil Fuels

Can Fracking Cause Earthquakes? 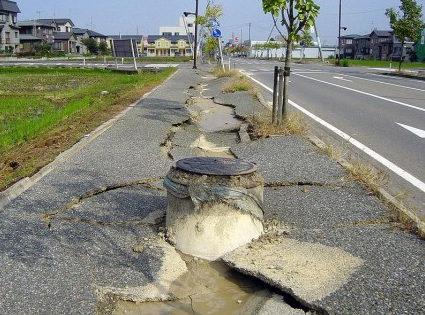 Injecting fluids into the Earth, whether to recover natural gas or to obtain thermal energy from the planet, can cause earthquakes. New reports that look at American fracking, deep waste-water injection and geothermal activities suggest there are big risks and thus a need to develop strong regulatory framework to deal with them.

The most striking indication of human-induced earthquakes is provided by the graph below, which shows the cumulative number of earthquakes in the central and eastern US that were greater than or equal to magnitude 3.0 on Richter scale. The clear increase from 2005 coincides with the rapid increase of shale gas wells and associated increased deep waste-water injection. Between 2005 and 2012, the shale gas industry in the US grew by 45% each year.

Three reports have been published this month in the journal Science that add to our limited but growing data on the causal link between fluid injections and earthquakes.

Pumping of fluids into the ground changes how ground water travels through the porous rock systems. This can affect the rock in two ways. First, these injected fluids can leak directly into faults, which are fractures in rocks, and change pore pressure along the fault, causing failure. Second, they can alter the mass or volume of the rocks that overlie a fault, which changes how much loading the layers underneath have to bear. In this case the fluids do not interact with the fault directly, but cause it to fail by changing its surroundings.

In the first report, a review article, William Ellsworth of the US Geological Survey points out that earthquakes are occurring in unusual locations in North America and Europe. He looks at activities where injecting fluids into the ground may cause earthquakes — such as mining for minerals and coal, oil and gas exploration/production, as well as the building of reservoirs and large waste-water disposal sites. Ellsworth examines three case studies of deep injection, which are particularly convincing.

In 1961, fluid was being injected to a depth of 3.6 km at a Colorado chemical plant for disposing hazardous chemicals. By early 1962, nearby residents started reporting earthquakes. By 1966, 13 such earthquakes had been recorded in that area with magnitude 4.0 or more.

In 1969, the US Geological Survey also started injecting fluids at another site in Colorado. This time, their aim was to understand how fluid pressure could influence earthquakes. They noticed that whenever the fluid pressure went beyond a critical threshold, more earthquakes were observed. This indicated that earthquakes could potentially be controlled if the pressure at which fluids are injected is controlled properly.

The most remarkable example, however, comes from injections in Paradox Valley in Colorado (still on-going). In that area, during the period of 1985 to 1996, only three tectonic earthquakes were recorded within 15km of the site chosen for injection. Between 1991 and 1995, when the injection tests were conducted, hundreds of induced earthquakes were detected within 1km of the site, but few were detected beyond 3km from the site and all were below magnitude 3.0. This situation, however, changed because of continuous injection activities. In 2000, there was an earthquake of the magnitude 4.3 which was recorded 8km from the site and earlier this year there was one of magnitude 3.9 recorded equally far away. This shows that long term injection can lead to expansion of the seismically active area and trigger bigger earthquakes.

In the second report, Emily Brodsky and Lia Lajoie of the University of California at Santa Cruz, look at the Salton Sea Geothermal Field in California. They track the total volume of fluid injected and extracted to extract heat from earth’s core, and find it correlates to the number and magnitude of earthquakes. So it’s not just injection, but also extraction needs to be paid attention to.

The last report is by Nicholas van der Elst of Cornell University and his colleagues. This study tracked induced earthquakes that are triggered by much larger natural earthquakes that occur far away. Injection of water in the deep ground elevates pore pressures and makes the faults and fracture networks in the rocks more vulnerable, so that a distant event can push the system over the edge and to cause earthquakes around the injection sites.

The fact that human activity alters the landscape in a way that can cause earthquakes is not surprising given the scale of activities. The mud volcano “Lusi” (Sidoarjo mud flow) in Indonesia is a striking example of what can potentially happen when drilling interacts with the subsurface with dramatic results, and even there debate lingers as to the “human trigger” for the event. At Lusi, a mud volcano erupted shortly after drilling for gas and as the ongoing disaster developed, it covered the surrounding houses, displacing some 13,000 families and closing 30 factories and hundreds of small businesses.

Humans are aware of the fact that earthquakes can be induced by fluid injection, and we are now increasingly understanding how they cause them. It is perhaps then, as Ellsworth concludes, high time to intervene with a clear regulatory framework to mitigate the risk.