Posted by plantitfilm on Thursday, 08 August 2013 in Wildlife Conservation 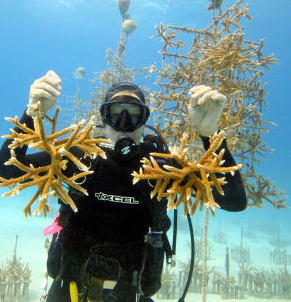 In fact, he’s been doing it for more than a decade, and recreational divers are volunteering in the effort.

“We are trying to put Humpty Dumpty back together again,” said Nedimyer, whose Coral Restoration Foundation has planted four coral nurseries off the shores of the Florida Keys. The foundation offers workshops and diving trips for recreational divers who help by cleaning and preparing new coral for planting.

“We are trying to get people to realize that it was a lot better and it can be brought back again,” Nedimyer added.

Divers helping out with the work first get a crash course in everything about corals. They learn that coral reefs are experiencing a rapid decline, particularly in the Caribbean.

“It’s not as magical as it once was, and it’s going downhill,” Nedimyer said.

The decline of coral has dire implications. Coral reefs, much like a rain forest, support a huge amount of biodiversity; attract tourism and commercial fishing; and act as a natural barrier to coastal erosion during storms.

In the Florida Keys, staghorn coral (cylindrical branches) and elkhorn coral (antler-like branches) face local extinction. Both are listed as threatened under the Endangered Species Act, and the National Oceanic and Atmospheric Administration has proposed listing them as endangered.

“Corals are dying rapidly, much more rapidly than we believe they have in the past, which is a problem for sustaining the populations,” said Margaret Miller, an ecologist with the National Marine Fisheries Service of NOAA. “Caribbean coral reefs are already dramatically changed from the way we understand they should look because 50 to 80 percent of the coral has already been lost from most Caribbean reefs.”

Nedimyer’s four coral nurseries are thriving. But Miller cautioned that while the “nurseries are helping us keep pace with this negative decline,” there needs to be a concerted effort to address larger problems such as global warming and the chemical makeup of the ocean “if coral reefs throughout the world are going to survive.”

In the meantime, recreational divers can join marine scientists in helping to buy time through the reef restoration efforts.

“The idea is to come up with a simple process and train people just like you to do it,” Nedimyer told a group of seven volunteer divers at a recent workshop in Key Largo that includes a series of educational lectures and hands-on dives to restore corals.

Nedimyer explained to the group that disease, severe cold fronts (just like Floridians, corals don’t like the cold), multiple years of coral bleaching (caused by warmer water and other environmental factors) and frequent hurricanes are among the “stressors” that have contributed to the rapid decline of the coral, along with climate change, overfishing, coastal development and more.

Nedimyer and his group have experimented with different ways to grow corals in the nurseries, much as you would with plants. At first, corals were mounted on concrete disks using underwater adhesive, with each disk attached to a PVC pipe with a cement base raising the disk off the ocean floor. Live tissue grew over the adhesive as the coral formed new branches.

Low-cost line nurseries were later introduced, where corals hanging from wire or monofilament survived at high rates and grew rapidly. But wildlife officials were concerned that dolphins, turtles and other species would get caught in the lines. The foundation’s latest technique has proved to be most effective: Corals hang on a tree nursery (think a Christmas tree with ornaments) that is tethered to the sea floor but can move around in storms.

The coral starts out about the size of a knuckle but can grow to 12 or 15 inches. The volunteer divers help Nedimyer attach the tiny starter coral fragments onto the tree nurseries about 30 feet below the surface of the water. When the coral lengthens and has healthy multiple branches, Nedimyer clips it for replanting in the popular diving and snorkeling spot Molasses Reef in the Florida Keys National Marine Sanctuary. (Boats are tied up to permanent moorings, marked by buoys, to prevent dropped anchors from damaging the reef.)