Posted by Angel on Thursday, 29 March 2012 in Ocean/Seas/Coastlines

The Navy and Rare Whales 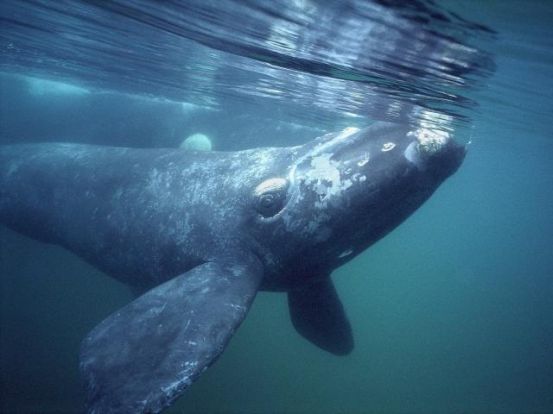 Environmentalists asked a federal judge Thursday to decide whether the Navy must halt plans to build a $100 million offshore training range because of potential threats to endangered right whales.

The Navy wants to install an undersea array of cables and sensors for training warships, submarines and aircraft about 50 miles off the Atlantic coast of southern Georgia and northern Florida. Environmentalists have sued to block the project, saying it’s too close to waters where right whales migrate near shore each winter to birth their calves.

“It’s possible we could find lots of right whales out on the range” along with their babies, said Catherine Wannamaker, an attorney for the Southern Environmental Law Center, in legal arguments Thursday before the judge.

The law center filed suit in 2010 on behalf of a dozen conservation groups, saying the Navy approved construction of the range before it finished studying how frequently right whales swim through the proposed 500-square-mile site.

Wannamaker said naval training concentrated in that area could put whales at risk of lethal collisions with warships, entanglement with parachutes and cords attached to military buoys and possible harm from mid-frequency sonar.

The Navy has concluded that installing 300 sensors and attached cables on the undersea range would pose virtually no threat to the whales because construction would be suspended during the calving season from November to April. It also concluded the risks of ship strikes would be minimal based on computer models showing few whales would be in waters that far out to sea. But it said further study was needed before training begins.

“There’s no reason the Navy should be punished for saying it will engage in further (environmental) review,” said Joanna Brinkman, a Justice Department attorney representing the Navy. Brinkman told the judge the military believes its computer models overestimated the frequency of right whales on the training site.

The Navy’s lawyers also insist vessels from nearby Naval Station Mayport in Florida and Naval Submarine Base Kings Bay in Georgia routinely post lookouts to watch out for whales during calving season. No collisions between Navy ships and whales have been reported since those precautions were implemented 15 years ago.

Environmentalists argue even trained spotters have trouble seeing right whales swimming just below the ocean’s surface. Their fears of whales swimming near the training site were bolstered in March 2010 when biologists recorded a right whale giving birth about 10 miles from the proposed range.

Judge Lisa Godbey Wood peppered attorneys on both sides with questions Thursday. She said she understood the environmentalists’ argument — if the Navy is allowed to go ahead and spend $100 million building the offshore range, would it abandon the project if studies later found training there would put whales at risk?

However, the judge also cautioned that just because the Navy has called for future studies that doesn’t mean it approved the project rashly.

“Surely you don’t want to hold it against someone that they will continue to evaluate and reassess in the future,” Wood said.

The judge said she planned to rule “fairly quickly” but did not specify exactly when.

Before filing suit, conservationists had asked the Navy to suspend training at the site during the five-month calving season and to comply with offshore speed limits the government imposes on private and commercial ships. The Navy refused, saying the precautions would interfere with its ability to train effectively and maintain readiness.

“The Navy’s need to maintain battle-ready sailors ... is a hard fact not to be taken lightly,” the Navy’s attorneys said in a written motion in the case.

The U.S. Supreme Court has weighed in an earlier case involving military training vs. protecting whales, siding with the Navy in a 2008 decision. Its ruling threw out restrictions on sonar use that lower courts had imposed on the Navy during training exercises off the coast of southern California, saying the need for a well-trained military trumped possible harm to an unknown number of marine mammals.

Some environmentalists argue that sonar can disrupt whale feeding patterns, and in extreme cases can kill whales by causing them to beach themselves. However, scientists don’t fully understand how sonar affects whales.