Posted by EarthDude on Saturday, 22 September 2012 in Earth Violators

590 Whales Dead in The Farow Islands 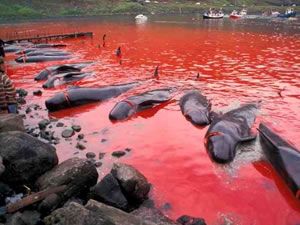 Some of the world’s leading environmental and marine conservation organisations have come together to write a letter to the Prime Minister of the Faroe Islands to halt one of the worlds most prolific whale hunts. This year (up to 24th August 2012) the islanders have killed 590 pilot whales bringing the total number of hunted whale wince the beginning of 2010 to 2,423.

Despite the warnings issued by the officers the Prime Minister and the government still support the killing of whales for human consumption.

The Faroe Islands whale hunt is a bloody operation where the seas really do turn red with blood. The Islands round-up the pilot whales using boats and drive them onto the beaches where other islanders are waiting to beat and hack the whales to death in a slow and painful fashion.

The ‘grinds’  – the name of this type of hunt – will see entire family groups of pilot whales rounded up and killed. The hunts also take place during the breeding season of April – July when the pilot whales migrate to the calm waters around the Faroe Islands for giving birth.  Despite the International Whaling Commission (IWC) banning hunting of whales during the breeding season the Faroe Islanders usually carry out a number of hunts during this time.

Maybe it's time this stopped.