Posted by grant on Sunday, 10 July 2011 in Earth Violators 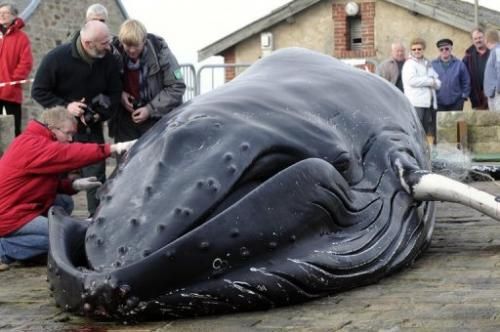 Body of a dead humpback whale is seen in Omonville-la-Rogue, north-west France, a rare species to the Channel. A French fishermen brought the whale back in his nets, saying that it was already dead when it was caught in the nets. Entanglement in plastic bags and fishing gear have long been identified as a threat to sea birds, turtles and smaller cetaceans.

Millions of tonnes of plastic debris dumped each year in the world's oceans could pose a lethal threat to whales, according to a scientific assessment to be presented at a key international whaling forum this week.

A review of research literature from the last two decades reveals hundreds of cases in which cetaceans -- an order including 80-odd species of whales, dolphins and porpoises -- have been sickened or killed by marine litter.

Entanglement in plastic bags and fishing gear have long been identified as a threat to sea birds, turtles and smaller cetaceans.

For large ocean-dwelling mammals, however, ingestion of such refuse is also emerging as a serious cause of disability and death, experts say.

In 2008, two sperm whales stranded on the California coast were found to have a huge amount -- 205 kilos (450 pounds) in one alone -- of fish nets and other synthetic debris in their guts. 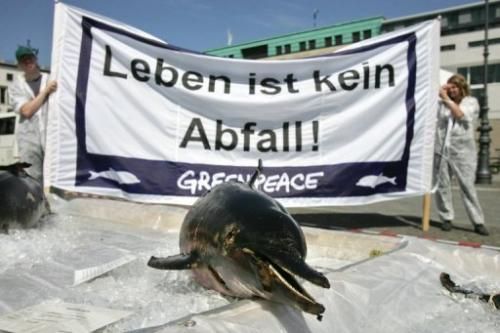 Greenpeace activists display dead whales and dolphins as a banner says "Life is not waste", in Berlin, in 2007. A review of research literature from the last two decades has revealed hundreds of cases in which cetaceans -- an order including 80-odd species of whales, dolphins and porpoises -- have been sickened or killed by marine litter.

One of the 50-foot (15-metre) animals had a ruptured stomach, and the other, half-starved, had a large plug of wadded plastic blocking its digestive tract.

In 2002, a dead minke whale washed up on the Normandy coast of France had nearly a tonne of plastic in its stomach, including bags from two British supermarkets.

"Cuvier's beaked whales in the northeast Atlantic seem to have particularly high incidences of ingestion and death from plastic bags," notes Mark Simmonds, author of the report and a member of scientific committee of the International Whaling Commission (IWC), which meets this week from July 11-14 on the British island of Jersey.

How widespread the problem is, and whether it could threaten an entire population or species, remains unknown.

"In many areas of the world, stranded whale carcasses are not recorded or examined, and in areas where strandings are recorded, examination of gut contents for swallowed plastics is rare," said Chris Parsons, a marine biologist at George Mason University in Fairfax, Virginia.

The majority of cetaceans that die from intestinal trauma getting caught up in fishing gear probably sink to the ocean floor, experts say.

"There is, however, evidence that plastic debris in the seas can harm these animals by both ingestion and entanglement, and this needs to be urgently further investigated," said Simmonds, Director of Science for Whale and Dolphin Conservation Society.

The main threats to cetaceans worldwide are accidental capture in fishing nets and climate change, he noted in an email exchange. 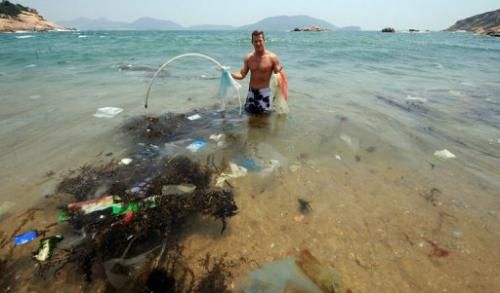 Doug Woodring, an entrepreneur and conservationist who lives in Hong Kong, shows rubbish washed up on a local beach. Millions of tonnes of plastic debris dumped each year in the world's oceans could pose a lethal threat to whales, according to a scientific assessment to be presented at a key international whaling forum this week.

"We don't yet know enough about marine debris to rank it against other theats, but as it continues to sadly grow in the oceans, it will surely play a greater and greater role."

Studies have shown that litter concentrates in so-called convergence zones -- formed by currents and wind -- where whales feed on abundant prey.

Scientists have been slow to measure the impact of ocean refuse on animals living in or by the sea, and international organisations have been even slower in taking action.

In 2003, the United Nations Environment Programme (UNEP) established the Global Initiative on Marine Litter, but it launched a detailed analysis of the scope of the problem only in 2009.

For whales, the level of threat from ocean garbage varies according to species and type of debris, the new report said.

For toothed whales from the suborder Odontoceti, ingestion of plastic pieces appears to pose the greatest danger.

Sperm and beaked whales are thought to be especially vulnerable because they are suction feeders.

Less is known about the impact on filter-feeding or baleen whales (suborder Mysticeti), which consume huge quantities of tiny zooplankton and small, schooling fish.

Potentially, the greater danger here is from toxins in plastic that breaks down over time into tiny, even microscopic, particles.

The IWC is riven between countries that oppose whale hunting, and those that back the handful of nations -- Japan, Iceland and Norway -- that defy a 1986 whaling ban or use legal loopholes to circumvent it.