Posted by amandaevans on Tuesday, 27 August 2013 in Animals 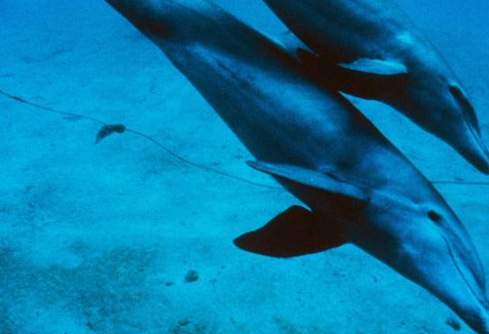 Genetic tests have confirmed that an outbreak of a measles-like virus known as morbillivirus is playing a major role in the massive dolphin die-off on the Mid-Atlantic coast.

This is the second big strike for the virus, which was the chief agent behind a wave of infections that struck bottlenose dolphins between June 1987 and March 1988, killing more than 700 animals before retreating into the blue.

"We are now calling it a morbillivirus outbreak," Teri Rowles of the National Oceanic and Atmospheric Administration's Marine Mammal Health and Stranding Response Program said during a telephone press briefing on Tuesday. As of Monday, 333 animals have died on coasts between New York and North Carolina.

Among 33 dolphins tested this summer, 32 dolphins have turned up with a suspected or confirmed case of the virus, Rowles said. Additional genome sequencing tests have confirmed that the cetacean morbillivirus was present in 11 animals.

Morbillivirus belongs to a family of RNA viruses that cause rinderpest in cattle, distemper in canine species, and measles in humans. In dolphins, the virus suppresses the immune system, so researchers are seeing "animals that are very thin, animals that have a lot of other diseases and infections," Rowles said.

The resurgence of the infection in bottlenoses could merely be natural forces at work. Infections have "always been happening in cycles," Perry Habecker, staff veterinary chief at the University of Pennsylvania, told NBC News.

The genetic makeup of bacteria and viruses changes slightly over time, Habecker said, and populations of animals can also lose their immunity. "There’s no doubt in my mind that these kinds of disease have been [recurring] for millennia."

Researchers suspect that morbillivirus is hosted by offshore populations of marine mammals, and was transmitted to coastal bottlenose dolphins in the spring or early summer. This year, the virus seems to have entered a population that "simply [doesn't] have an immune response to effectively fight off the virus," Stephanie Venn-Watson of the National Marine Mammal Foundation said.

Researchers are planning analyses for the very first cases — strandings that may have occurred as early as February or March this year — to check if environmental factors contributed as a trigger.

Aside from the morbillivirus, a second suspect is the Brucella bacterium, which has been found in tissue samples from four dolphins from Virginia, NOAA says. Marine mammals are common hosts for the bacterium.

In the last few weeks, dead dolphins have begun washing up on the North Carolina coasts, which indicates that the outbreak, like the migrating dolphin herds, is moving south. If this year's die-off progresses like the 1987-88 outbreak did, the strandings are likely to continue until the spring of 2014.

Between now and then, there's not much researchers can do to stop the spread of the virus — logistics stand in the way of research vessels going after wild dolphin herds with vaccines.

So the strandings are likely to end, as they probably began, through natural events. Researchers anticipate that some dolphins still out at sea will have survived the infection and earned immunity. Survivor numbers will grow, and over time the virus, having completed its deadly rounds, will find no new bottlenoses to infect.