Posted by plantitfilm on Monday, 21 September 2009 in Climate Change

President Obama delivered a speech to the United Nations today as 100 world leaders gathered for the highest-level summit yet on climate change. Obama said the United States is "determined to act" as the "threat from climate change is serious, it is urgent, and it is growing."

Here is the text of Obama's speech as prepared for delivery: 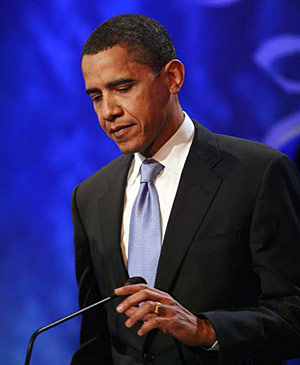 Good morning. I want to thank the Secretary-General for organizing this summit, and all the leaders who are participating. That so many of us are here today is a recognition that the threat from climate change is serious, it is urgent, and it is growing. Our generation's response to this challenge will be judged by history, for if we fail to meet it -- boldly, swiftly, and together -- we risk consigning future generations to an irreversible catastrophe.

No nation, however large or small, wealthy or poor, can escape the impact of climate change. Rising sea levels threaten every coastline. More powerful storms and floods threaten every continent. More frequent drought and crop failures breed hunger and conflict in places where hunger and conflict already thrive. On shrinking islands, families are already being forced to flee their homes as climate refugees.
The security and stability of each nation and all peoples -- our prosperity, our health, our safety -- are in jeopardy. And the time we have to reverse this tide is running out.

And yet, we can reverse it. John F. Kennedy once observed that "Our problems are man-made, therefore they may be solved by man." It is true that for too many years, mankind has been slow to respond to or even recognize the magnitude of the climate threat. It is true of my own country as well. We recognize that. But this is a new day. It is a new era. And I am proud to say that the United States has done more to promote clean energy and reduce carbon pollution in the last eight months than at any other time in our history.

We're making our government's largest ever investment in renewable energy -- an investment aimed at doubling the generating capacity from wind and other renewable resources in three years. Across America, entrepreneurs are constructing wind turbines and solar panels and batteries for hybrid cars with the help of loan guarantees and tax credits -- projects that are creating new jobs and new industries. We're investing billions to cut energy waste in our homes, buildings, and appliances -- helping American families save money on energy bills in the process. We've proposed the very first national policy aimed at both increasing fuel economy and reducing greenhouse gas pollution for all new cars and trucks -- a standard that will also save consumers money and our nation oil. We're moving forward with our nation's first offshore wind energy projects. We're investing billions to capture carbon pollution so that we can clean up our coal plants. Just this week, we announced that for the first time ever, we'll begin tracking how much greenhouse gas pollution is being emitted throughout the country. Later this week, I will work with my colleagues at the G20 to phase out fossil fuel subsidies so that we can better address our climate challenge. And already, we know that the recent drop in overall U.S. emissions is due in part to steps that promote greater efficiency and greater use of renewable energy.

Most importantly, the House of Representatives passed an energy and climate bill in June that would finally make clean energy the profitable kind of energy for American businesses and dramatically reduce greenhouse gas emissions. One committee has already acted on this bill in the Senate and I look forward to engaging with others as we move forward.

Because no one nation can meet this challenge alone, the United States has also engaged more allies and partners in finding a solution than ever before. In April, we convened the first of what have now been six meetings of the Major Economies Forum on Energy and Climate here in the United States. In Trinidad, I proposed an Energy and Climate Partnership for the Americas. We've worked through the World Bank to promote renewable energy projects and technologies in the developing world. And we have put climate at the top of our diplomatic agenda when it comes to our relationships with countries from China to Brazil; India to Mexico; Africa to Europe.

Taken together, these steps represent an historic recognition on behalf of the American people and their government. We understand the gravity of the climate threat.

We are determined to act. And we will meet our responsibility to future generations.

It is work that will not be easy. As we head towards Copenhagen, there should be no illusions that the hardest part of our journey is in front of us. We seek sweeping but necessary change in the midst of a global recession, where every nation's most immediate priority is reviving their economy and putting their people back to work. And so all of us will face doubts and difficulties in our own capitals as we try to reach a lasting solution to the climate challenge.

But difficulty is no excuse for complacency. Unease is no excuse for inaction. And we must not allow the perfect to become the enemy of progress. Each of us must do what we can when we can to grow our economies without endangering our planet -- and we must all do it together. We must seize the opportunity to make Copenhagen a significant step forward in the global fight against climate change.

We also cannot allow the old divisions that have characterized the climate debate for so many years to block our progress. Yes, the developed nations that caused much of the damage to our climate over the last century still have a responsibility to lead. And we will continue to do so by investing in renewable energy, promoting greater efficiency, and slashing our emissions to reach the targets we set for 2020 and our long-term goal for 2050.

But those rapidly-growing developing nations that will produce nearly all the growth in global carbon emissions in the decades ahead must do their part as well. Some of these nations have already made great strides with the development and deployment of clean energy. Still, they will need to commit to strong measures at home and agree to stand behind those commitments just as the developed nations must stand behind their own. We cannot meet this challenge unless all the largest emitters of greenhouse gas pollution act together.

There is no other way.

We must also energize our efforts to put other developing nations -- especially the poorest and most vulnerable on a path to sustainable growth. These nations do not have the same resources to combat climate change as countries like the United States or China do, but they have the most immediate stake in a solution. For these are the nations that are already living with the unfolding effects of a warming planet -- famine and drought; disappearing coastal villages and the conflict that arises from scarce resources. Their future is no longer a choice between a growing economy and a cleaner planet, because their survival depends on both. It will do little good to alleviate poverty if you can no longer harvest your crops or find drinkable water.

That is why we have a responsibility to provide the financial and technical assistance needed to help these nations adapt to the impacts of climate change and pursue low-carbon development.

What we are seeking, after all, is not simply an agreement to limit greenhouse gas emissions. We seek an agreement that will allow all nations to grow and raise living standards without endangering the planet. By developing and disseminating clean technology and sharing our know-how, we can help developing nations leap-frog dirty energy technologies and reduce dangerous emissions.

As we meet here today, the good news is that after too many years of inaction and denial, there is finally widespread recognition of the urgency of the challenge before us. We know what needs to be done. We know that our planet's future depends on a global commitment to permanently reduce greenhouse gas pollution. We know that if we put the right rules and incentives in place, we will unleash the creative power of our best scientists, engineers, and entrepreneurs to build a better world. And so many nations have already taken the first steps on the journey towards that goal.

But the journey is long. The journey is hard. And we don't have much time left to make it. It is a journey that will require each of us to persevere through setback, and fight for every inch of progress, even when it comes in fits and starts. So let us begin. For if we are flexible and pragmatic; if we can resolve to work tirelessly in common effort, then we will achieve our common purpose: a world that is safer, cleaner, and healthier than the one we found; and a future that is worthy of our children. Thank you.