Posted by plantitfilm on Monday, 22 February 2010 in Animals 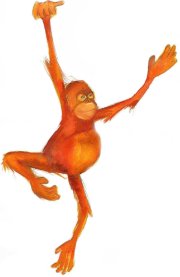 The name “orangutan” literally translates into English as “man of the forest”. It comes from Malay and Bahasa Indonesian orang (man) and hutan (forest).

Orangutans are extremely intelligent creatures who clearly have the ability to reason and think. Their similarity to us is uncanny. Baby orangutans cry when they’re hungry, whimper when they’re hurt and smile at their mothers. They express emotions just like we do: joy, fear, anger, surprise…. it’s all there. If you take a few minutes and watch an orangutan, you’ll swear they’re just like us. And they kind of are….

Orangutans are large, but in general are quite gentle. Large males can be aggressive, but for the most part they keep to themselves. They are uniquely arboreal– living their lives quietly up in the trees away from predators… and only descending to the forest floor when they must. Were it not for the occasional squealing of a baby or calling out of a big male, you would hardly even know they were there. They don’t bother anyone. They don’t want anything to do with us. They’re too busy getting on with their lives.

Local Indonesian mythology has it that orangutans actually have the ability to speak, but choose not to, fearing they would be forced to work if were they ever caught. Legends aside, even if this were the case, who could blame them?

Propagation
In prehistoric times, orangutans lived throughout Asia– roaming as far north as China. Today deforestation and the spread of humans have limited the untouched rainforest to a few remaining areas in Borneo and Sumatra. It is only on these two island that there are large enough forest areas to sustain a viable breeding population of orangutans. But even here the forest is rapidly disappearing. During the last 50 years their habitat has been eaten away by urban growth, plantations and farmland. The spreading of oil palm plantations – unless it is stopped – could spell the end of all wild orangutans…

Tree dwellers
While exact numbers are unknown, one thing is for sure: the number of orangutans in the wild is decreasing drastically. In Sumatra the latest calculations show that orangutan numbers have been reduced from 12,000 in 1993 to only about 6,500 today. In Borneo fewer than 40,000 orangutans are believed to remain.

Below you can find some facts about orangutans. Remember that the numbers are estimates. Exact figures are hard to come by. Please visit our links page to find more sources for orangutan facts.

Their arms are much longer than their legs.
The arm span for large males can be up to 8 feet.

Average lifespan: Estimated 35-40 years in the wild, into the 50s in captivity– depending on diet and exercise.

Number of babies: One at a time, every 6 or 7 years, perhaps as many as 4 or 5 total.
Infants never leave their mothers.

Babies nurse until they are about 6 or 7 years old. They have the longest dependence of any animal on earth.

Young males begin to break away from their mothers after they, themselves, reach puberty. Females stay with their mothers longer, often learning child-rearing skills from her.

Even though they reach puberty at about 8 years old, a female isn’t physiologically ready to have her own baby until she’s in her teens.

Their diet consists of bark, leaves, flowers, a variety of insects, and most importantly, several hundred types of fruit. They can eat fruit which we would consider unripe, giving them an advantage over other fruits eaters.

Babies need to learn to recognize hundreds of species of plants and trees– which ones are edible, and how to consume them, which ones to avoid. Some orangutan favorites are very difficult to eat because they are protected by sharp spines husks and shells. Young orangutans need to be taught how to extract the fruit.

Orangutans can be said to have 4 hands, as they are equally capable with both their hands and feet.

They are physically built for life in the trees. Walking on the ground can be somewhat slow and awkward for them. It may appear humorous to us, but imagine how we would look trying to get around in the trees. They are at a great disadvantage on the ground, so they rarely come down from the treetops. Predators– including humans– are on the ground. In essence, everything they need to live is up there, so why come down?

Sexually mature males have a large throat sac, which is used to make a very distinct sound: known as the ‘long call’. Sort of like a lion’s roar, this bellowing groan echoes through the forest and is used by males to let females know they are there or warn other males to keep away. Mature males also have a distinct set of large cheekpads, which are believed to help their long call resonate throughout the forest canopy.

Orangutans make their home high up in the trees and build new nests each night out of leaves and branches.

Males live solitary lives until they find females who are ready to mate. The couples stay together for several days in order to ensure a successful mating. Afterwards, the males disappear back into their solitude.

Due to their large size, males are often too heavy to travel in the higher (thinner) branches. They are also more likely than females to travel on the ground.

Food is often scarce during the dry season– which is why orangutans are semi-solitary creatures. When food is abundant, though, they use the opportunity to socialize and gather in small groups. When food is scarce, they travel alone.

Orangutans have been known to make and use tools. When water is difficult to locate, they chew leaves to make a sponge to soak up water in tree cavities. They use branches to poke into termite holes. They use large branches to test water depth before crossing streams. When it rains very hard the orangutan makes an umbrella for himself out of big leaves.