Scientist in the Pacific Gyre Study

The Scripps research vessel (R/V) New Horizon left its San Diego homeport on Aug. 2 for the North Pacific Ocean Gyre, roughly a thousand miles off California's coast. With collaborators from Project Kaisei, the team is surveying plastic distribution and abundance, collecting samples for analysis in the lab and assessing the impacts of debris on marine life.

The scientists and research volunteers onboard are seeking scientific data on just how much influence the accumulation of human-produced plastic and other debris has on this ocean area. Prior to this cruise, very little was known about the size of the "garbage patch" and threats to marine life and the gyre's biological environment.

According to the scientists, "at numerous areas of the gyre, flecks of plastic are prevalent and easily spotted against the deep blue sea water." On Aug. 11, SEAPLEX researchers encountered a large net with tangled rope, net and plastic with various marine organisms attached and also recovered three plastic bottles covered with marine organisms, including large barnacles.

On Aug. 12, Pete Davison, a Scripps Oceanography graduate student studying mid-water fish in the gyre, collected several mid-water species using an Oozeki trawl, including the pearleye (Benthalbella dentata), a predatory mid-water fish, which has eyes that look upward so that it can see prey swimming above, and lanternfish (Tarletonbeania crenularis), which swims daily from as deep of 700 meters (2,297 feet) to the ocean surface.

"Though we'd been pulling up plastic in our nets for days, seeing it freely floating about, not bunched up in a net, was shocking," said Goldstein in her Aug. 15 Seaplexscience blog post. "The magnitude of the problem suddenly came crashing down on me - how could there be this much plastic just floating in a random patch of ocean a thousand miles from land?" 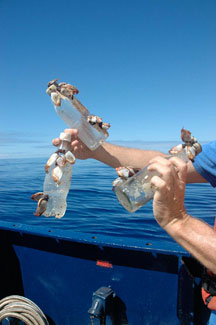 In addition to supporting SEAPLEX, Project Kaisei also has a sailing vessel in the region examining the ocean gyre, collecting and studying plastic and other debris forms from the ocean to showcase new technologies that will be used for processing and recycling.

The public has been following SEAPLEX through its daily blogs posted on the Web: http://sio.ucsd.edu/Expeditions/Seaplex/

Press Conference with SEAPLEX science team set for Aug. 27
Upon completion of the cruise, scientists and supporters from the Scripps Oceanography SEAPLEX expedition will recount their research voyage and discuss initial scientific findings at a press conference at Scripps Institution of Oceanography in La Jolla, Calif., on Thursday, Aug. 27, at 11 am (PDT).

Streaming web video and dial-in, tele-conference calling capabilities for media will be available. Members of the media may pre-register by emailing: This email address is being protected from spambots. You need JavaScript enabled to view it.

Project Kaisei
Project Kaisei consists of a team of innovators, scientists, environmentalists, ocean lovers, sailors, and sports enthusiasts who have come together with a common purpose.

To study the North Pacific Gyre and the marine debris that has collected in this oceanic region, to determine how to capture the debris and to study the possible retrieval and processing techniques that could be potentially employed to detoxify and recycle these materials into diesel fuel.