Posted by Dale on Sunday, 04 November 2012 in General Environment

Should The Environment Be Voted For? 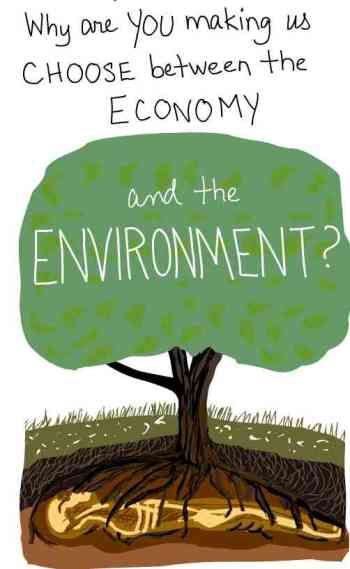 My friend Tom Brokaw recently wrote an op-ed about an issue gone missing in this election -- the war, the two wars, we’ve been involved in for the past decade, that so far have taken 5,000 American lives and a trillion dollars out of the treasury. Tom’s call for voters to take a more sober look before casting ballots on Tuesday inspires me to call attention to another issue that goes unheralded in this election, and every election in recent memory.

The health of our environment never makes it to the top list of voter concerns. But it has everything to do with all the major issues our elected officials face. Everything we make ultimately comes from the ground, or what’s beneath it, or from our common waters. Every job and every economy depends ultimately on the health of the natural world of which we’re a part.

We’ve seen a decade of record heat around the world, more-virulent storm systems, the evacuation of a major American city and, just this fall in Pakistan, the flooding of an area the size of Italy with seven million homeless. New drilling techniques for harder-to-reach oil created the largest oil spill in history. Fresh water, a resource for which we have no alternative, is being drawn down all around the world faster than it can be polluted. The major fisheries are depleted or close to depletion. The fish at the top of the food chain will poison us if we eat too many in a given month. A gyre of plastic waste twice the size of Texas floats the Pacific. There are fewer species of all kind, flora and fauna – fewer strands to the web of life. They’re disappearing at a rate unprecedented since the meteor hit the dinosaurs.

And when it comes to war, as with politics, follow the money. Once you see past the rhetorical fog of curtailed freedom or misapplied justice, you’ll find an important resource base, or access to one.

What is to be done? Plenty – and on all fronts. Well-meaning people have brought every one of these questions to the attention of their fellow citizens. People everywhere are learning what they can do to harm nature less in the course of their ordinary day. Some of these people are politicians. We have to assume that the people we elect to office care, and care deeply, about finding the human means to live as part of nature. But they don’t always make it a part of their political program.

For example, George Bush, in his retirement, collects rainwater and uses geothermal energy to run his house in Crawford. “We’ve tried to live our life that way, you know, without thumping our chest,” he said in a recent interview. “We just did it. Not for political purposes, just because we want to live our life.” The presidential library he’s building at Southern Methodist Univeristy will be LEED-certified.

That’s good, but not enough. We need a lot more senators, congressmen and women and governors willing to both  “live their lives” and stake their political fortunes on the work we need to do to keep the planet habitable and life possible for our children. The private feelings we all share for our compromised, endangered natural environment must translate now into a steady stream of responsible action from communities, which includes government and business. That stream will also translate into jobs.

What can you do today? Vote as though your life depended on it. Before you mark your ballot, check the environmental record of the person you’re voting for. The League of Conservation Voters’ environmental scorecard provides a good place to start.

Yvon Chouinard is the founder and owner of Patagonia, Inc.