Posted by acox on Saturday, 05 January 2013 in Clean Technology

The Missing Link In Photosynthesis 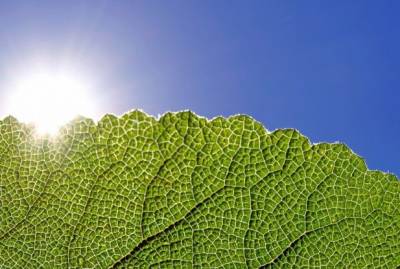 For almost three decades, scientists have tried to identify a particular enzyme involved in regulating electron transport during photosynthesis. Now, a research team from Ludwig Maximilians Universitat (LMU) has found the missing link, which turns out to be not so new.

All life on Earth is sustained by photosynthesis, a sunlight powered process that provides energy-rich compounds and the molecular oxygen that higher organisms depend on. “Biochemical solar cells” called photosystems capture the sunlight. Photosystems are found in plants, algae and certain types of bacteria. Plants have two photosystems – PSI and PSII – each consisting of a pigment-protein complex that uses solar energy to raise electrons to a higher energy level. These electrons are passed along a chain of electron acceptors, releasing energy used for the synthesis of ATP. ATP is considered the “coinage” used for all energy transactions in cells.

Electron transport can occur along several different routes. First, so-called linear transport delivers the electrons to a small molecule called NADP to form NADPH with the participation of both PSI and PSII. A second route is cyclic electron flow – which can take two alternative paths – only involves PSI and is used solely for the production of ATP, with electrons following the major route are passed via an acceptor called plastoquinone to the cytochrome b6f complex and from there back to PSI, thus completing the cycle.

“The identity of the carrier that donates electrons to plastoquinone, and thus makes the process of cyclic electron flow possible, has long been a subject of controversy,” says LMU biology Professor Dario Leister. Leister, along with his colleagues, has succeeded in identifying the crucial missing link in the process, which they describe in a recent issue of the journal Molecular Cell.

In order to maintain the appropriate balance between ATP and NDPH, which are both required for synthesis of sugars from CO2, plants can switch between linear and cyclic modes of electron transport. The team claims this implies the allocation of electrons between photosystems can be regulated. Ferredoxin, an electron transporter which receives electrons directly from PSI, acts as the junction that connects the two.

“It was therefore proposed, more than 30 years ago, that a so-called ferredoxin-plastoquinone reductase (FQR) must exist, which ensures that electrons can be re-injected into the electron transport chain, and thus allows for cyclic electron transport,” Leister explains, “but despite intensive searches, no such enzyme had been found.”

The team identified a protein called PGRL1 in 2008. This protein is able to interact with PSI and other factors known to participate in cyclic electron transport. The current study has allowed the team to characterize the precise biochemical function of PGRL1 – the long sought-after FQR that plays a central role in the regulation of cyclic electron flow.

“In the long term, this finding may help us to improve photosynthetic performance by replacing or modifying specific components of the electron transport chain,” Leister points out.

PGRL1 and other pivotal regulators could possibly be tuned in to a targeted fashion to enhance the efficiency of photosynthesis. This would increase the yields in crop plants grown under controlled conditions. A complete understanding of the structure and regulation of the photosystems is required to develop methods that would allow for the optimization of the process of photosynthesis for various applications such as raising crop yields, designing new types of solar cells or generating molecular hydrogen for use as an environmentally friendly energy source.