In the sea, almost everything that swims, burrows or crawls can be presented on a plate and eaten. Yet many marine species aren't well known among chefs and diners. The lack of variety on the menu represents not only a loss of culinary opportunity, but also a potential source of ecological imbalance. No one knows this better than sustainable seafood devotee Rizwan Ahmed, chef/owner of the Hourglass Brasserie.

"There is an abundant diversity of marine life that can be used and prepared by chefs to put on their menu," Ahmed said. "But nine out of 10 restaurants have species like cod. This puts a heavy load on the cod population. People have now become so accustomed to a limited choice of seafood that they are not willing or are not aware of other species that taste just as good if not better."

Chef Riz, as he is called at the restaurant, speaks with good authority. In addition to being a chef, he is a professionally trained marine biologist. Ahmed's is a story of two parallel career paths that have more in common than one might think. Growing up in Karachi, Pakistan, along the Arabian Sea, he had two great loves: the increasingly besieged coastline down the street from his house, and his mother's home cooking. Unable to choose which of these passions to follow, he obtained both a marine ecology degree from the University of Maine and a culinary arts degree from Le Cordon Bleu Institute in London. After working in both fields, he married a woman from Bristol and opened the restaurant on Thames Street in 2010.

Despite ultimately choosing a kitchen over a research vessel, Ahmed brings his knowledge and love of the ocean to bear in every aspect of his life as a chef.

"To me it is the duty of the chef not just to provide an excellent meal but to educate the guests on what they are eating," he said. As part of this commitment, Ahmed participated in a six-part dinner series that took place around Rhode Island last year called "Eating with the Ecosystem." Eating with the Ecosystem is an initiative to promote a new, place-based definition of "sustainable seafood" that takes into account the whole ecosystem, rather than evaluating single species in isolation. Each dinner in the series featured presentations by scientists, fishermen and chefs, and presented an array of seafood from one of three New England ecosystems: Southern New England, Georges Bank and the Gulf of Maine. 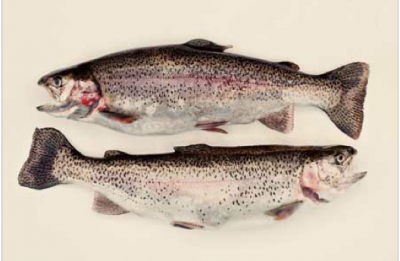