Posted by acox on Sunday, 27 January 2013 in Climate Change

Climate Change No Longer a Hoax? 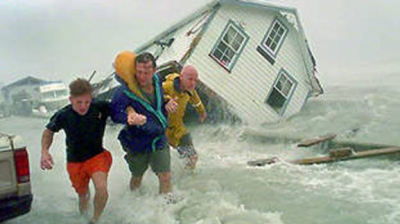 (CBS News) Withering drought, vast wildfires, town-leveling tornadoes, fierce heat -- not to mention superstorm Sandy -- all made 2012 one of the worst years in terms of lives lost and property destroyed from extreme weather.

Most scientists believe climate change is partly to blame for last year's wild weather. Jeffrey Kluger, Time magazine's senior editor for science and technology, spoke to Jim Axelrod and Rebecca Jarvis about the record temperatures and massive storms and why we're seeing more of these extremes.

Obama: "We will respond to the threat of climate change"

First, Kluger wanted to be clear on the distinction between weather and climate.

"Weather is the short term event: A day, a week, a month, even a year," he said. "Climate is these large, thematic changes."

Over the last 40 years, record-setting temperature months around the world have increased five-fold. Nine of the top ten warming years on record have been in the 2000s. And Hurricane Katrina-type events are turning out to be twice as likely in years with warming.

Kluger said climatologists have long been warning the public of the dangers of too much carbon in the atmosphere, and now, all of the changes they had been predicting have happened on schedule.

"If your doctor told you 40 years ago that if you don't take certain precautions you were going to get sick in certain ways... and it happened, you'd say she knew what she was talking about," he said. "We know what the solutions are. We just have to be able to embrace them."

Kluger likened climate change deniers to the Flat Earthers and the people who say the moon landings never happened.

"At some point, the body of evidence becomes so overwhelming that if you're denying it, you're sort of willfully excluding yourself from the 'big table' where the conversations take place," he said. "The argument that [climate change] is a hoax has been demolished."