Posted by thatsenough on Tuesday, 09 April 2013 in Climate Change

Another climate change warning, written in the shells of crabs 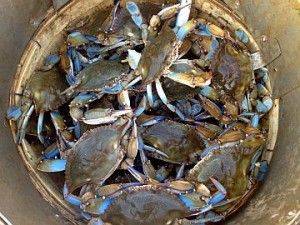 We’ve all heard about rising sea levels and the possibility of more frequent, stronger storms. But oyster death? The Post’s Darryl Fears on Monday highlighted one of the many consequences of carbon dioxide emissions that scientists are only just beginning to detect — and most Americans have probably never considered — in Washington’s nearby Chesapeake Bay.

“Higher levels of carbon in the ocean are causing oysters to grow slower, and their predators — such as blue crabs — to grow faster,” Justin Baker Ries, a marine geologist at the University of North Carolina’s Aquarium Research Center, said in an recent interview.

Over the next 75 to 100 years, ocean acidification could supersize blue crabs, which may then eat more oysters and other organisms and possibly throw the food chain of the nation’s largest estuary out of whack.

Crab-lovers looking for a silver lining to this news won’t get one: The same effect that allows the bay’s blue crabs to grow larger also mitigates against producing more meat underneath their bigger shells.

The fate of the bay’s oysters is just one example. Ocean acidification could also decimate the world’s coral reefs. Another is a huge uptick in the appetites of pine tree beetles in the Rocky Mountains, against which the Forest Service is fighting a desperate battle. Among other things, that may well affect drinking and irrigation water in the region.

Not moved by rapid changes in natural resources? How about the increasing vulnerability of the Northrop Grumman dry dock in Hampton Roads? Shipbuilders are supposed to engineer a new generation of aircraft carriers there, but flooding shuts the operation down. The company worries, with reason, that sea-level rise threatens several billions of dollars in coastal defense infrastructure.

Some claim that the effects of carbon emissions might be good for the United States — longer growing seasons? — or that humans can simply adapt to higher temperatures and more acidic seas. Certainly, we’ll adapt better than those oysters will. But when I hear these arguments, I wonder whether those who make them have really thought about the oysters, the pine beetles, the dry docks and all other other ways, big and small, in which their ecology is changing. Combine those with all of the unpredictability that comes with messing with complex natural systems on such a large scale. Taking these considerations together, the argument for complacency looks very weak, and the case for spending some money now to hedge against the possibility of many negative results later looks really good.