Posted by plantitfilm on Thursday, 08 August 2013 in Mining 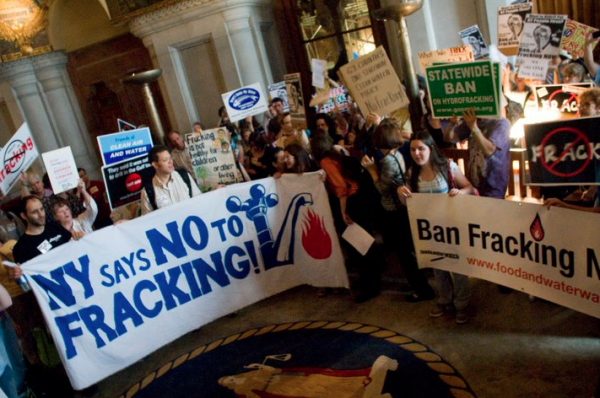 Clare Donohue, founder of an anti-fracking group called Sane Energy Project, said that out of the eight million people living in New York City, "You can walk up to anyone on the street and they haven’t heard about fracking yet." But if New Yorkers knew more about what fracking could do to their city, she believes it would blow their minds, literally.

On June 25, 3,000 people from around the state gathered outside Gov. Andrew Cuomo's fundraiser at the Plaza Hotel. Organized by Clare Donohue, they rallied in hopes  to try and convince the politician to outlaw something called fracking. Short for hydraulic fracturing, fracking is a method of tapping into previously unreachable deposits of gas by injecting the ground with hundreds of gallons of water laced with toxic chemicals. The anti-fracking movement has been growing steadily each year, and with the possibility of lawful fracking coming to New York, activism has skyrocketed all over the state. Although there are many hazards that fracking can impose on people's health, there is one consequence that may bring some people to their boiling point.

Donohue told The Indypendent that fracking has recently caused a dangerous water pipe explosion in a small suburban town near San Francisco called San Bruno. Although San Bruno is not dense enough to put many people in danger, she said that the pipes that exploded are the same size as the one's used in New York. According to Donohue, "If you translate that kind of destruction into the West Village, into Harlem, it is insane. In New York, you blow up the pipeline, then you blow up the cars, then you blow up the boilers; it is explosion, explosion, explosion.”

But as time goes on and New York begins facing the realistic threat of having these fracking facilities in their own backyards, more and more people are starting to get involved. In fact, the rally outside of the Plaza Hotel was not the only protest that happened that month. Protesters and celebrities also gathered on June 17 to call on Gov. Cuomo in Albany. Among the 2,000 people in attendance were singer-songwriter Natalie Merchant, actress Debra Winger, and Josh Fox, the director of an influential documentary about the horrors of fracking called Gasland.

Although there are many groups in and around NYC who plan to organize more events to help fight hydrofracking in the future, there are many ways you can get involved right now. Clare Donohue's Sane Energy Project is just one of many anti-fracking groups in New York who are striving to make a change. Some of the other groups who protested outside of the Plaza Hotel included New Yorkers Against Fracking,United For Action, Credo, Food & Water Watch, Catskill Mountainkeeper, Frack Action, Occupy the Pipeline, VeRSE (Vestal Residents for Safe Energy), Brooklyn for Peace, and Environmental Action.

In addition to holding public demonstrations, members of these organizations and other anti-fracking activists leave hand-written or phone messages to politicians, urging media outlets to spread the word, and informing the general public. On August 10 and 11, the Sane Energy Project is planning a trip to Jones, Rockaway, and Long Beach in order to inform beachgoers about the opening of a proposed Liberty Natural Gas Port.