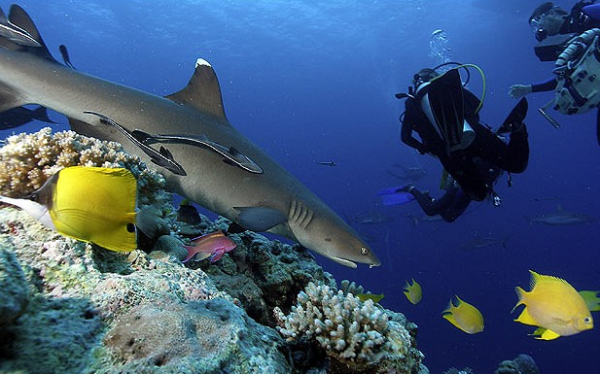 It is estimated that coral reefs cover around 284,000 square kilometers providing a habitat for thousands of species to live. And unless you've snorkeled in some of these underwater habitats, or perhaps have seen a Planet Earth documentary, most of us have never experienced these natural wonders.

But thanks to Google Earth, you can now visit up-close and personal some of the world's most imperiled ecosystems. The Google team is currently working with scientists to provide 360 degree panoramas, similar to Google street-view, to give armchair ecologists a chance to experience the most biodiverse ecosystems under the waves.

"Only 1% of humanity has ever dived on a coral reef and by making the experience easily accessible the survey will help alert millions of people around the world to the plight of coral reefs," says Ove Hoegh-Guldberg with the University of Queensland. Hoegh-Guldberg heads the Catlin Seaview Survey which brings cameras mounted to a manned vehicle to photograph the reefs. Last year the team did around 30 surveys in the Great Barrier Reef region, while this year they have expanded to the Caribbean.

The technology has other potential beyond education and appreciation. Researchers hope to employ citizen scientists to identify marine species via images, helping to catalogue biodiversity on embattled reefs. Much like the way the public can upload pictures onto Google Earth and Google Maps, there will be a feature to create public interaction in helping with the project.

Coral reefs are threatened by pollution, coastal development, on-land deforestation, and overfishing. However the largest threat to coral reefs is burning fossil fuels, which is pushing marine temperatures up and causing to ocean acidification.

"Our results show that even under the most moderate climate change projections from the Intergovernmental Panel on Climate Change, most corals will struggle to survive and reefs will rapidly decalcify," says Hoegh-Guldberg, who is running a longterm project in Australia that measures how corals respond to rising temperatures and acidification in controlled conditions.

In addition, global warming poses a major threat to these massive living structures and the improved Google Earth application will allow us to explore the state of coral reefs around the world, seeing their distribution and concerns facing their future existence.