Posted by ekeith on Sunday, 15 September 2013 in Climate Change 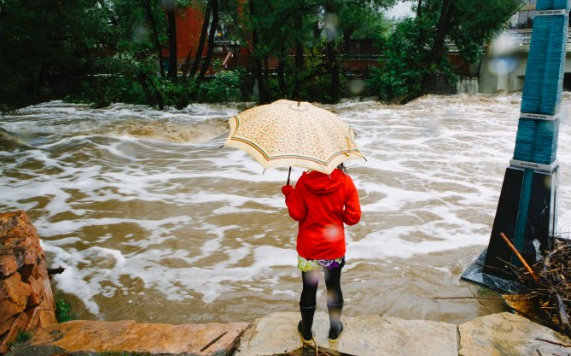 I live in Denver, Colorado, and for the past few days, we've had nothing but rain. Three months of rain in 48 hours, to be exact. The surge of water has caused rivers and streams to overflow their banks, drowning Boulder, Loveland, Longmont, Estes Park and many other towns along the Front Range under several feet of rushing water.

Conditions were so bad, the National Weather Service felt compelled to use the words "biblical rainfall amounts" to communicate the risk to local residents.

Any other time, extra precipitation is cause for rejoicing in Colorado. Ongoing drought has facilitated massive wildfires across the state for two years running. We’ll take all the wet we can get, although as the past few days have shown, we'd prefer it doesn't all fall at once.

As I write this, the rain has slowed, even stopped in some areas (although they say more is on the way). Soon, evacuated residents will be able to return to their neighborhoods to pick up the pieces. Later, the flood waters will recede, rivers returning to their regular boundaries. Life will return to normal, but what most people won't realize is that "business as usual" is the reason this catastrophe occurred in the first place.

Yes, heavy rainfall can always cause flash flooding, but according to local meteorologists, what happened in Colorado was made worse by climate change. How? To find the connection, we have to look back at the opposite of wet — the very, very dry weather that's become all too common in the Centennial State.

"[O]ne factor has made the flooding considerably worse: the wildfires that have stricken the forests in the region in the past few years," Kari Bowen, a meteorologist with the National Weather Service (NWS) office in Boulder, told NBC. When almost all of the trees and vegetation in an area are wiped out by fire, the planet’s normal tools for fighting erosion are erased as well.

Okay, so wildfires set the stage for devastating floods, but what's behind the fires?