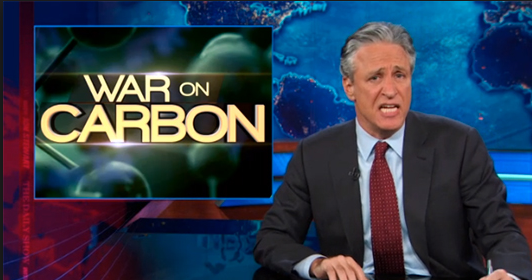 The past four days have been a frozen hell for an estimated 186 million people across parts of Canada and all 50 states in the US, as freezing air called the polar vortex swirled down from melting polar ice caps.

There were 21 deaths attributed to weather-related incidents, with transportation nightmares that involved closed Interstates, 7,000 canceled flights and Amtrak trains stranded with frozen engines.

The situation was no laughing matter, but Jon Stewart turned the ignorant rants of “stupid liberal hoax” by climate deniers disparaging global warming due to the cold—into absolute clown-car hysteria.

Stewart’s first show in 2014 started with a monolog against stupid, climate-change denying statements by pundits on Fox News and he mentioned the following examples:

Daniel Henninger (Jan. 4, 2014): “Global warming, a phrase we're all familiar with, I think it's going to die this year ... given the kind of incredible cold weather we've had this weekend.”

Stuart Varney (Jan. 2, 2014): “Looks to me like we're looking at global cooling. Forget this global warming. That's just my opinion.”

Stewart acted incredulous that such ignorance is still being propagated on any serious level and skewered the stupidity in his usual tongue-in-cheek style:

There you have it. War on Christmas is over, the War on Carbon begins. Global warming, just one more liberal conspiracy. Because even though there is a great deal of scientific data establishing climate trends, even though many of the models of global warming predict more extremes of weather — not just warming — apparently decades of peer-reviewed scientific study can be, like a ficus plant, destroyed in one cold weekend.

Scientists know that traditionally polar vortex winds circle the polar ice cap, which traps the coldest temperatures on Earth in that location. But global warming has caused deterioration in the system, which sent arctic weather south into areas it normally doesn’t reach, including parts of Europe.

"When the polar vortex … breaks down, this allows cold air to spill south, affecting the eastern United States and other regions," says NOAA's Dr. James Overland, as reported by CBC News. "This can result in a warmer-than-average arctic region and colder temperatures that may include severe winter weather events on the North American and European continents."

Stewart also had fun pointing to ridiculous statements made by Fox’s Eric Bolling about the Russian ship stuck in Antarctic ice.

Eric Bolling (Jan. 4, 2014): “I gotta tell you, I think these scientists are laughing from their lavish laboratories, and their vacations up at the Arctic, in their nice boats that are well-equipped.”

Stewart responded by looking woefully at an in-frame shot of the Russian research ship wedged nearly sideways in 10’ ice.

“Yeah, that's the dream, man,” said Stewart. “I remember thinking, when I get older, I'm gonna be taking one of them Arctic research cruises. And monitor sh!t, 'cause all the ladies be like, ‘Damn, your readings are so accurate.’"

Then Stewart opined, “Look, it seems like there's a simple way to solve this. Just bring on someone whose opinion we all respect, and whose expertise in this field cannot be denied.”

Donald Trump shows up in-frame, to which Stewart buries his face in his hands:

Meanwhile, Australia has experienced temperatures close to 130 degrees in recent days and has dealt with decades of drought and ravaging bush fires. But climate deniers are incapable of seeing the big picture on a subject that is agreed upon by thousands of the world’s top scientists.

The polar vortex is winding down and temperatures are expected to start inching up over most of the country Wednesday and Thursday. Although many areas will remain at freezing temperatures, the subzero numbers and wind chill factors will finally begin improving conditions.

Brilliantly, Stewart used his brand of humor Tuesday night to reveal the absurdity of climate denier’s misinformed talking points, but it won’t likely change extremist opinions on global warming and here is the comedian’s astute explanation:

“In the minds of many conservatives, to admit that climate change is real and the byproduct of carbon emissions is to admit that liberals are right, and they just can’t have that…”