Posted by David on Friday, 10 January 2014 in Transportation 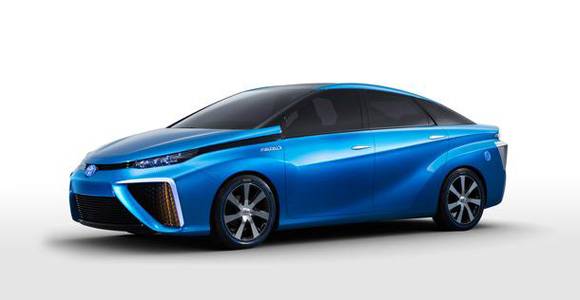 After years running on the fumes of hype, hydrogen fuel-cell vehicles are beginning to hit the road.

Toyota made a big splash when it announced at the annual Consumer Electronics Show that it would market such a car beginning in the 2015 model year. Hyundai has also committed to roll out a fuel-cell vehicle next year. And Honda has already begun leasing its hydrogen-powered FCX Clarity to customers in California.

Each of the vehicles can travel roughly 300 miles without a refill — three times what the Chevy Volt can do — and reaches a top speed of about 100 miles per hour. A refill takes just a few minutes to achieve, and because the hydrogen is used to produce electricity, the cars drive without the familiar roar of an internal combustion engine.

“This is just the beginning of a long process,” Nick Nigro, senior manager for transportation initiatives at Center for Climate and Energy Solutions, or C2ES, told Singularity Hub.

So what’s driving the changes? The same two factors that spur the adoption of many cutting-edge technologies: falling costs and growing government incentives.

Costs have fallen since hydrogen fuel-cell vehicles were first promised at the turn of the 21st century. Toyota said it has shaved 95 percent of the cost of producing the powertrain and fuel tanks compared to what it cost the company to build its original hydrogen prototype in 2002. Even so, the fuel-cell cars cost roughly twice as much as their gas-powered cousins, leading the automakers to offer them only for lease, not for sale.

More cost-efficient electric powertrains have flowed from the experience automakers gained building the current generation of plug-in electric vehicles, according to Nigro. The cost of hydrogen fuel-cell vehicles is expected to continue to fall, matching that of conventional cars by 2023, according to an influential 2008 study by the National Academy of Sciences.

It’s already possible to make the hydrogen gas that powers the vehicles for a price competitive with that of gasoline. But it’s dirtier hydrogen than the form produced from nothing but water so often touted. Hydrogen gas, which doesn’t occur naturally, can be produced in a number of ways, but it’s currently most economically obtained from hydrocarbons such as methane and ethanol. As a result, although today’s hydrogen-powered cars emit only water vapor, their use nevertheless results in carbon dioxide and other emissions upstream.

The real trouble is there’s no system for producing and dispensing the hydrogen gas directly to automobile storage tanks.

“There is a legitimate chicken-and-egg issue with fuel-cell vehicles because you can’t go out as an individual and buy hydrogen at this point,” said Nigro, of C2ES.

That’s where government incentives come in. Zero-emissions vehicles incentives, put in place in several U.S. states to make electric vehicles more appealing to consumers and automakers alike, have helped fuel-cell vehicles a little bit. But without “gas” stations nearby, not many consumers would be likely to buy the cars at any price. In September, California stepped in with funds to help build refueling infrastructure — and, voilà, just a few months later, three automakers are announcing they will debut hydrogen vehicles in the Golden State.

“There’s no doubt that the success of this technology will depend less on the genius of the car than on the ownership experience. Cost is one thing, but convenience is another,” acknowledged Bob Carter, senior vice president of automotive operations of Toyota U.S.A.

“Stay tuned, because this infrastructure thing is going to happen,” Carter added.

To help ensure its cars sell, Toyota will help the University of California Irvine’s Advanced Power and Energy Program map out potential locations for additional hydrogen fueling stations in California.

So will fuel-cell vehicles trump battery-powered electric vehicles in coming years? Nigro says no. The vehicles have different advantages and weaknesses, he said. For instance, a hydrogen fuel cell is much likelier to power a big truck than an enormous electric battery.

“It’s quite possible that they both will win,” he said. “It seems likely there will be a healthy mix of fuels in transportation in next few decades.”