Posted by rackfokus on Saturday, 18 January 2014 in Climate Change 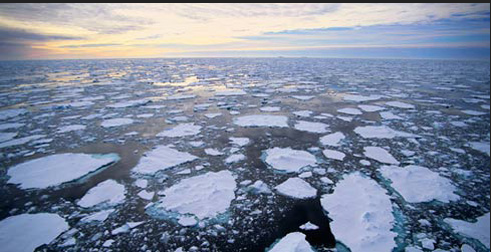 Here's your starter for ten. Who is about to issue a report concluding that “climate change has had a visible and direct impact on the Arctic region?” and that dramatic reductions in its sea ice are on the way. The much maligned Intergovernmental Panel on Climate Change? The Green Party? Yet another noisy environmental pressure group competing for public attention? Nope. None of the above. It's those infamous, sandal-wearing, green hippies in the Pentagon.

The report, Arctic Road Map – which is due to be published by the US Navy in the next few weeks – is to warn that by as early as 2025 the ice will have melted so much that commercial shipping will be able to sail though enormous tracts of the Arctic Ocean for several months of the year. It is entirely unimpressed by, admittedly ludicrous, claims by some sceptics that last year's partila recovery in Arctic Sea ice from a record low in 2012 means that a cooling period has now set in, and believes that continued warming will give the United States its first new ocean to police since the Pacific in the middle of the last century.

“The inevitable opening of the Arctic will essentially create a new coast on America's north”, Admiral Jonathan Greenert, Chief of Naval Operations, told the Wall Street Journal. And this presents him a problem since, as the report will point out, the Navy lacks both “operational experience” in the area and vessels that can cope with Arctic conditions.

And yet shipping in the ocean is increasing. The US Coast Guard says that 240 ships were operating off North Alaska last year, up from 190 in 2011, and its local commander, Rear Admiral Thomas Ostebo, says that “maritime commerce is happening at a faster rate than people realise”. The US Naval War College in Newport, Rhode Island, has run war games to work out how to defend the emerging navigation routes.

Russia – says the independent think tank, the Center for Strategic and International Studies – already has 25 icebreakers to defend its interests, but the US Navy has none. Hardening an existing warship could cost up to £300 million, while building a new icebreaker could come to $784 million – a huge spending commitment, when experts suggest that the US will need to have at least ten of them, at a time when the US armed forces are undergoing severe budget cuts.

“This is not a good time to be putting a lot of bills on the table” admits General Charles Jacoby, who is in charge if Northern Command, which oversees the Arctic. But he has no doubt that the ice is melting, and little time for the debate on whether global warming is responsible. “I don't have the luxury of having a political opinion on this” he told the climate change sceptic Journal. “It has happened. And it needs to be accounted for”.