Posted by hzicko on Monday, 20 January 2014 in Recycling

Waste Facility to Triple the Amount of Trash Recycled 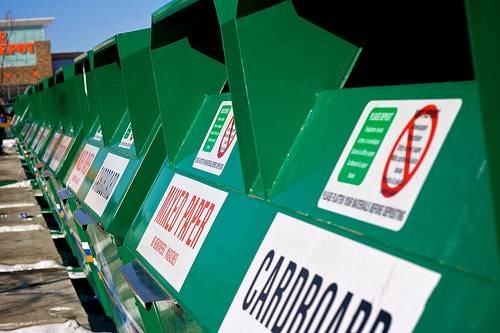 A new plant in Glendale, Arizona promises to triple the amount of trash the city recycles each year when it begins operations in April. The facility, which is being built by Chicago-based company, Vieste, will be located on 6 acres of Glendale's landfill, just a few miles west of the University of Phoenix stadium.

About two-thirds of the city's waste will be diverted to Vieste's facility where it will be sorted to find recyclables. The company's 40 to 50 employees will help sift through the piles of trash to find small recyclables such as plastic or glass. A large magnet will help pull metal objects from the garbage and screens will help sort through paper products. The building, which spans the size of three basketball courts, will also have ample room to sort through large recyclables and cardboard.

Through its efforts, Vieste expects to recover 26,000 tons of recyclable products each year, which is more than double what the city recycles. Currently, Glendale only recycles items that residents place in recycling bins, which amounts to about 12,000 tons of materials each year.

In addition to the positive environmental impact of diverting recyclable material from the landfill, the plant should be financially beneficial for both Vieste and the city. Vieste has signed a 30-year agreement to pay $100,000 per year to lease its space at the city's landfill. In addition, the company has to pay the city $476,000 in management costs in the first year, with a price increase of 0.5 percent every year.

But Vieste stands to make a nice profit too. The city of Glendale has agreed to sell any recycled materials salvaged by Vieste at a guaranteed price of almost 7 cents per pound. Based on Vieste's expectation for the amount of materials it can retrieve, the company stands to make more than $3.6 million each year.

In the future, Vieste plans to deploy a pyrolytic gasification process at its facility. The technology, purchased from the Hoskinson Group, will allow the plant to turn trash into electricity. With pyrolytic gasification Vieste will be able to place trash in an oxygen-deprived chamber to cook at temperatures up to 2,000 degrees Fahrenheit. The cooking process then creates steam and gas that can be converted into energy.

Once the company has found someone to purchase its energy supply, it will start generating electricity. According to the Hoskinson Group, Vieste should be able to process up to 800 tons of trash each day and at maximum capacity, the facility could generate up to 54 MW of clean electricity.

Paul Batistelli freelances in the energy field for the promotion of a greener society and energy means. He works to raise awareness on ecological issues, energy dependency, and reducing carbon footprints.