Posted by malikaali on Monday, 27 January 2014 in Climate Change

What Does The Moose Tell us About Climate Change? 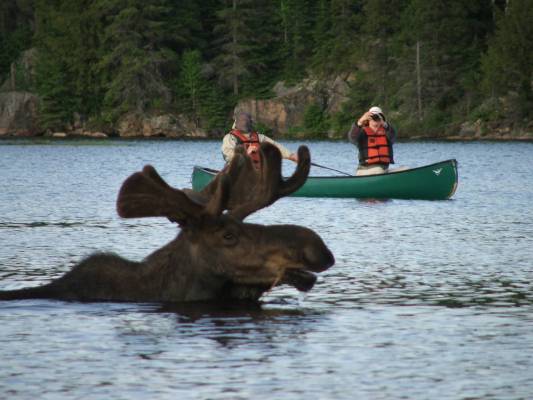 If you were a shrew snuffling around a North American forest, you would be 27 times less likely to respond to climate change than if you were a moose grazing nearby.

That is just one of the findings of a new University of Colorado Boulder assessment led by Assistant Professor Christy McCain that looked at more than 1,000 different scientific studies on North American mammal responses to human-caused climate change. The CU-Boulder team eventually selected 140 scientific papers containing population responses from 73 North American mammal species for their analysis.

“If we can determine which mammals are responding to climate change and the ones that are at risk of disappearing, then we can tailor conservation efforts more toward those individual species,” said McCain. “Hopefully, this potential loss or decline of our national iconic mammals will spur more people to curb climate impacts by reducing overuse of fossil fuels.”

The studies assessed by the team examined seven different responses to climate change by individual mammal species: local extinctions of species known as extirpations, range contractions, range shifts, changes in abundance, seasonal responses, body size and genetic diversity. The researchers used statistical models to uncover whether the responses of the 73 mammals to a changing climate were related to aspects of their physiology and behavior or the location of the study population.

The analysis showed only 52 percent of the mammal species responded as expected to climate change, while 7 percent responded the opposite of expectations and the remaining 41 percent had no detectable response. The two main traits tied to climate change responses in the CU-Boulder study were large mammal body size and restricted times during a 24-hour day when particular mammal species are active, she said.

“This is the first time anyone has identified specific traits that tell us which mammals are responding to climate change and which are not,” said McCain of CU-Boulder’s ecology and evolutionary biology department.

While body size was by far the best predictor for response to climate change -- almost all of the largest mammals responded negatively -- the new study also showed that mammals active only during the day or only at night were twice as likely to respond to climate change as mammals that had flexible activity times, she said.

The researchers also found that species with higher latitudinal and elevation ranges, like polar bears, American pikas and shadow chipmunks, were more likely to respond to climate change than mammals living lower in latitude and elevation. The ability of mammals to hibernate, burrow and nest was not a good predictor of whether a species responded to climate change or not. American pikas have been extirpated from some of their previously occupied sites in the West, as have shadow chipmunks, which are in decline in California’s Yosemite National Park.

One of the most intriguing study findings was that some small mammals may shelter from climate change by using a wider array of “micro-climates” available in the vegetation and soil, she said. McCain compared the findings with the events at the K-T boundary 66 million years ago when an asteroid smacked Earth, drastically changing the climate and killing off the big dinosaurs but sparing many of the small mammals that found suitable shelter underground to protect them from the cataclysmic event.

“I think the most fascinating thing about our study is that there may be certain traits like body size and activity behaviors that allow some smaller mammals to expand the range of temperature and humidity available to them,” said McCain, also a curator of vertebrate zoology at the University of Colorado Museum of Natural History. “These areas and conditions are not available to bigger mammals that live above the vegetation and experience only ambient temperatures.”