Posted by ScottyB on Friday, 14 February 2014 in Climate Change 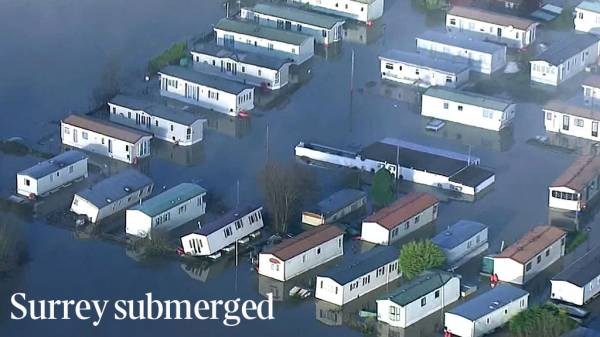 As Great Britain finds itself in the clutches of an extreme weather event, its scientists are inching closer to attributing this winter's unusual spate of floods and storms to climate change. As usual, however, they are moving cautiously.

"In terms of the storms and floods of winter 2013/2014, it is not possible, yet, to give a definitive answer on whether climate change has been a contributor or not," concluded the United Kingdom's Met Office in a lengthy report published this week.

But the experts admit, however, that when taken as a whole, the persistence and clustering of the storms inundating the United Kingdom this winter with flooding and heavy rains are unprecedented in modern times and are sending a strong signal that the climate change links need to be better understood.

"For England and Wales this was one of, if not the most, exceptional periods of winter rainfall in at least 248 years," the Met Office report stated. The agency is the U.K. equivalent of the U.S. National Weather Service.

The chief scientist at the Met Office, Dame Julia Slingo, said earlier in a panel discussion: "All the evidence suggests there is a link to climate change. There is no evidence to counter the basic premise that a warmer world will lead to more intense daily and hourly rain events."

Despite criticism yesterday, as reported in The Guardian, from Lord Lawson -- a former Conservative chancellor who was apparently unaware of Dame Julia's role as the report's lead author and who claimed the Met Office's report denied a global warming link -- Dame Julia's comments reflect what was written in the report.

The report states: "There is an increasing body of evidence that shows that extreme daily rainfall rates are becoming more intense, and that the rate of increase is consistent with what is expected from fundamental physics. ... It is worth emphasizing that there is no evidence to counter the basic premise that a warmer world will lead to more intense daily and hourly heavy rain events."

Barry Gromett, a spokesman for the Met Office, wrote in an email, "We can't definitively link the recent storminess, rainfall and flooding to climate change partly because of the highly variable nature of UK weather and climate and the lack (for the moment) of formal attribution studies."

A series of swift global changes
"However, some studies are now suggesting a shift in the Atlantic storm track, steering depressions on a similar track to those we've seen recently. Observations show global mean rainfall is increasing and there is also some evidence that extreme daily and hourly rainfall totals are showing similar trends. This is consistent with basic physical premise that a warmer atmosphere can hold more water," Gromett wrote.

Lawson's statement that "[t]here's been bad weather before. And anyhow, climate change is a global phenomenon, and you don't attribute local things like this necessarily to some global picture," might have rung true in the 1990s, when computer modeling work was still in its infancy, but today, scientists have the tools to put local implications into the global context.

The problem is in putting those tools into action. "The attribution of these changes to anthropogenic global warming requires climate models of sufficient resolution to capture storms and their associated rainfall. Such models are now becoming available and should be deployed as soon as possible to provide a solid evidence base for future investments in flood and coastal defences," the report concluded.

A global analysis in fact shows just how connected the U.K. storms are to the rest of the world. That extreme cold weather over the United States and Canada is coinciding with the U.K. storms is not by chance. These are not local events happening in isolation, but rather storms associated with "major perturbations to the Pacific and North Atlantic jet streams driven, in part, by persistent rainfall over Indonesia and the tropical West Pacific," Dame Julia and her team at the Met Office reported.

The higher rainfall over Indonesia is itself tied to higher-than-normal ocean temperatures in that region. Looking at the weather patterns in December and January, the rainfall and perturbations to the jet stream would imply La Niña-like conditions. And while El Niño or its cold counterpart La Niña is usually the first suspect in ocean temperature and rainfall variations, the eastern Pacific showed no sign of either.

The western Pacific, however, has been anomalously warm for much of the past decade. Westerly winds in the upper troposphere in January responded to Indonesia's heavy rainfall and in turn sent the jet streams "buckling" over North America.

Connections with warming Arctic, polar vortex
Over in the Atlantic, northern subtropical ocean temperatures are currently warmer than the average for the last 30 years (1981-2010) and substantially warmer than they were 30 years prior to that (1951-80). The warming in the Arctic over these same periods has also rapidly increased.

These winter polar night jet winds have reached speeds at times in excess of 100 meters per second. "In terms of the U.K. weather, the stronger than normal polar vortex throughout the winter is an indication of a less variable and colder stratosphere than normal and a strong polar night jet," the Met Office reported.

The high winds and heavy rains brought record-breaking North Sea storm surges and tidal flooding that on Dec. 4-5 coincided with one of the highest tides of the year -- similar in manner to the 1953 event, which spurred the construction of the Thames barrier.

This winter, flow rates on the River Thames have remained exceptionally high for longer than in any previous flood episode. The barrier, completed in 1982 and designed to protect 48 square miles (125 square kilometers) of central London, has been closed 28 times since Dec. 6, 2013. "This represents one fifth of all the closures -- about 150 -- since it was inaugurated," reported the BBC.

Last night, hundreds of people were stuck on trains stopped in their tracks as winds of up to 108 mph forced transit delays during a fresh round of storms that are expected to last into the weekend.

"With sea defences already weakened the storms that affected southern England on 4th and 5th February, and expected for 7th and 8th February, have caused serious localised damage to infrastructure. The strength of the waves, driven onshore by the very strong winds, and the consequent height of the storm surge produced very dangerous conditions along southern coasts. The heavy rainfall that accompanied these systems also led to worsening conditions in areas already affected by prolonged flooding," reported the Met Office.

According to live updates by the Mirror, fallen trees and flooding again sent emergency crews scrambling yesterday. In Devon, workers have welded together 11 shipping containers filled with sand and stone to form a new temporary sea wall and scaffolding.

During his speech at the IPPR think tank today, Energy Secretary Ed Davey is expected to say that some members of the Conservative Party are "undermining public trust in the scientific evidence for climate change" and that "we can see around us today the possible consequences of a world in which extreme weather events are much more likely," reported The Guardian.