Posted by rackfokus on Sunday, 16 February 2014 in Environmental Heroes

Michael Bloombergs Plan to spend $53 Million on The Fish in the Sea. 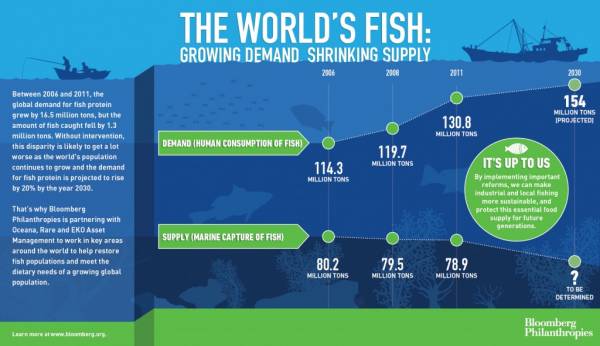 Last week, former New York City mayor Michael Bloomberg announced his plan to spend $53 million on restoring the number of fish in the sea. It’s one of the largest single contributions ever made for such work. More than three quarters of the world's fisheries are in a "state of collapse," according to the UN Food and Agriculture Organization. A 2006 study published in Science predicted that by the end of this century, many commercial ocean fish stocks will be producing less than 10 percent of their peak catch levels. AsWonkblog's Brad Plumer joked: "Then it's time to eat jellyfish."

The global demand for seafood and fish products is expected to rise by 20 percent between now and 2020. Many countries are now supplanting their dwindling harvests of wild fish with farmed fish. The aquaculture boom has its own set of problems, but rising fish farming is another indicator of how severely the ocean has been depleted.

The marine capture (ocean fish) sector is not productive enough anymore, and aquaculture is filling in the gaps. (UN Food and Agriculture Organization)

People have begun preparing for a world without wild fish. That’s the bad news. The good news is that many experts think restoring abundance to the ocean is actually totally possible—it’s just going to take some investment.

How much investment? We need to spend much, much more than tens of millions of dollars. But Bloomberg’s $53 million will still have a measurable impact, which could convince the rest of the world to pony up the extra billions that fixing the fisheries will cost.

The Case for Investing in Fisheries

In 2008, the World Bank estimated that the global catch industry misses out on a potential $50 billion annually, and that these inefficiencies added up to a two trillion-dollar loss between 1974 and 2004. That's the difference between what we're currently getting out of fisheries and what we could be getting. The World Bank said that to prevent future losses and maximize profitability, two things needed to happen. First, stop trying so hard to catch fish (more on this later, but basically: stop subsidizing the global fishing fleet and investing in destructive-yet-powerful fishing gear.). Second, encourage growth in fish populations by managing them “sustainably." This is a somewhat nebulous proposition, but it differs from the “reduce effort” dictum by focusing on local fishing communities and generating broader public interest in the health of fish stocks.

Catch effort is increasing while actual catches are decreasing. (The World Bank)

Two studies came out in 2012 further quantifying the benefits of rebuilding fish stocks. The first, published in Science, concluded that fisheries reform, broadly speaking, could generate a 56% increase in abundance and between an 8 and 40% increase in global catches. The second, published in PLOS One, estimated that rebuilding stocks would cost about $203 billion – including funding to push some fishermen out of the industry by buying back their boats – but that within twelve years the economic benefits would outweigh the costs. In line with the World Bank estimate that there’s a potential annual $50 billion to be had from global marine fishing, the authors of this study think that eventually the industry’s annual value could be $54 billion rather than the current negative-$12 billion.

The Bloomberg project to "save the oceans and feed the world" is called theVibrant Oceans Initiative. Over the next five years, Bloomberg Philanthropies is going to dole out $53 million to three organizations to fund specific fisheries reforms in Brazil, Chile, and the Philippines. The three organizations—Oceana,Rare, and EKO Asset Management—are all based in the U.S.

Oceana is a giant advocacy group that campaigns for international policy changes for the ocean. Rare's signature strategy is training conservation leaders in local communities around the world; its contribution to the Vibrant Oceans Initiative will be about on-the-ground engagement with fishermen in Brazil and the Philippines. (Bruce Barcott wrote an excellent report on this approach, which depends on developing a community that sets limits for itself, a few years ago.)

Of particular interest is EKO's role in the partnership. The investment firm will design opportunities for investors to fund schemes that reward fishermen (and industrial fleets) for implementing changes, and earn shares of the returns that hopefully come about from those changes.

EKO works in the burgeoning field of "impact investing"—also known as socially responsible investing or "philanthrocapitalism." This type of investing has been put to work against social problems—think Kiva, the Acumen Fund,Ashoka—but hasn't been applied to conservation issues with the same fervor. "I think it's still a relatively young, immature market," EKO co-founder Jason Scott said in an interview.

"The most interesting thing to us is how you develop funds and find transactions that cross a range of risk and return and impact spectrums," said Scott. Some investors care most about high impact, and are willing to take higher risks and generate lower returns in exchange. Others "want exactly the same [return] that they'd get out of a commercial or public equity or private equity deal, and then there's a ton of space in between."

I asked him where Bloomberg fits on that spectrum. "We don't know yet," he said, emphasizing that EKO plans to identify a handful of different opportunities for investing in fisheries in Brazil, Chile, and the Philippines.

The first time Scott looked at a graph depicting the recovery of a fishery, he said, out loud, "That looks like a J-curve"—something he recognized from his career in private equity. So he had a classic if-true-then-wow moment: "I said, 'if the science behind that is true, then this is a really attractive investment'."

Unlike gold or oil, according to Scott, "fisheries are a naturally renewing resource that, if properly managed, will provide income, livelihoods, and health benefits to local communities." Given those benefits, Scott figured that it must be possible to design a "really interesting investment vehicle" around this. He's about to find out, thanks to the Bloomberg grant. "We're not committing a thousand percent to saying that it's true, but the data would indicate that you should be able to create a long-term sustainable investment with attractive returns." It's a pilot project—one that Bloomberg Philanthropies is betting big on.

This integration of policy reform, on-the-ground community engagement, and impact investing has never been applied to fisheries before.

Antha Williams, who leads the foundation's environmental programs, said that's just Bloomberg's style: "Once we're persuaded that a strategy is going to be effective, we go in really big." Another hallmark of the Bloomberg approach is scalability. The Vibrant Oceans Initiative is starting with just three countries, which—while very important on their own, said Williams—are only responsible for 7 percent of global marine catch. But this unique integration of policy reform, on-the-ground community engagement, and impact investing has never been applied to fisheries before. Only after modeling and tweaking the approach in these three countries will we be able to prove that it works, explained Williams. After that, Bloomberg, Oceana, Rare, and EKO can work with other groups and other investors to expand the reform across the ocean.

Williams said she believes the Bloomberg approach has the potential to solve the problem of overfishing. Even though problems like this so often "seem intractable," you can accomplish a lot "once you get around relying on international bodies or national governments to make the changes and you figure out some of these local solutions and interventions." Only 30 countries are responsible for 90 percent of the industry's total catch, she added, "so it's not like you need to tackle the entire world."

The unmentioned factor in all the above is the role of the annual subsidies that fund unsustainable fishing practices. These are direct and indirect financial transfers from governments to the fishing industry (for fuel, for boats, etc.) that lead to increased fishing effort, higher operating costs, and lower yields —because there are too many people chasing too few fish. A number of countries are basically throwing upwards of $20 billion into the ocean each year while simultaneously taking fish out faster than we can replace them.

"You're paying people to trash the environment," is how Jason Scorse, the director of the Monterey Institute's Center for the Blue Economy, described global fishing subsidies. So, he wondered, is the Bloomberg initiative going to address this issue, too?

It hasn't been mentioned explicitly in press coverage so far, but one guesses that this is where Oceana will contribute heavily. Since 2007, Oceana has beencampaigning to get the World Trade Organization to establish limits on fisheries subsidies. Reducing these subsidies might be the single most important thing to secure the future of fisheries. Money belongs in the economy. Fish belong, mostly, in the sea.