Posted by EarthDude on Thursday, 13 March 2014 in Green Products/Services

Vinegar catching on as a powerful green cleaner 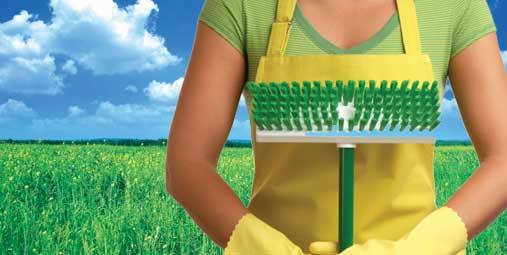 The cleaning product of the future has been around for most of human civilization and is probably already in your pantry.

White distilled vinegar is simple, cheap, nontoxic and above all, convenient. It also may be the elusive, streak-free answer to dirt-caked windows.

It's hard to know just how old-school vinegar is. Vinegar is made when alcohol is allowed to ferment further into acetic acid, so it's likely that vinegar has been a part of human culture for almost as long as wine, though it's hard to say for sure how long people have been using it as a household cleaner.

These days, vinegar is enjoying a cleaning renaissance. Many people concerned with the environment embrace it, said Henry, who uses vinegar in many of her homemade green cleaning products.

"I used to clean houses occasionally for some extra money. Inhaling the fumes from bleach were really starting to bug me," Henry said. "I started thinking, 'What if I made my own?' It would be cheaper and then I would know exactly what was in it."

Henry has been in business for three years and sells her homemade cleaning products on the side. She adds essential oils to her blends to improve the smell and give a disinfecting boost, she said.

Henry said she uses vinegar on most everything but hardwood floors and stone surfaces. She said she worries about the vinegar etching the stone and eating away at the finish on some floors.

"It's funny because some people rave about using vinegar on hardwood floors," she said, "I don't want to risk it."

But for everything else, vinegar can be extremely useful, Henry said.

Many websites tout that the acetic acid that makes vinegar sour also makes it an effective antimicrobial. Vinegar fights mildew and mold, making it useful in the bathroom and other moist places where fungus flourishes. Try using it as a post-shower spray.

When it comes to other pathogens, such as bacteria and some viruses, vinegar doesn't quite make the cut though, chemical experts say. Vinegar kills the infectious salmonella bacteria, but it fails to eradicate E. coli and Staphococcus as well as bleach -- different chemicals are used to make different kinds of bleach, but chlorine bleach typically contains sodium hypochlorite -- and Lysol, a brand name cleaner with benzalkonium chloride as the active ingredient.

Neither bleach nor Lysol is fully embraced as a green cleaner, though. Bleach has a strong chemical smell and must be kept away from children, while Lysol is a soup of different chemicals.

To boost the cleaning power of veinegar, some mix it with other disinfectants. Hydrogen peroxide and vinegar in concert produce peracetic acid, a disinfectant that is greater than the sum of its parts, according to the EPA.

Joszeph Schultz, owner/chef of India Joze in Santa Cruz, said that while he loves vinegar, he embraces it as a pantry staple, not as a cleaner.

Instead he uses commercial bleach and other similar products. He says most cleaners are alkaline, unlike vinegar. For him, keeping a totally germ-free kitchen is of the utmost importance.

But while it is not as tough on germs as its alkaline counterparts, vinegar certainly is less abrasive and safe to use around children and animals.

Another plus? More scientists are talking about what is called the "hygiene hypothesis" -- the idea that we keep our environments too clean and by doing so don't expose our immune systems to enough pathogens to train them to appropriately respond to foreign invaders.

Chalk another one up for vinegar.