Posted by dundiedanc on Monday, 31 March 2014 in Air Quality 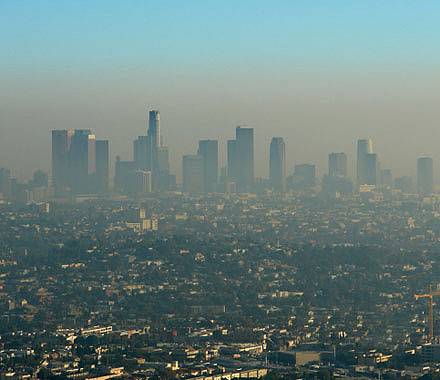 Smog is an irritation for anyone living in Los Angeles, but exactly where in the city you live can make a huge difference in your in your exposure to the tiniest air pollutants, a new study has found.

A zone of the Westside neighborhood of Mar Vista that sits downwind of Santa Monica Airport, for instance, has much higher levels of those pollutants in the air than the Eastside’s freeway-choked Boyle Heights, according to the study.

They focused their measurements, taken during summer afternoons in 2008 and 2011, on an especially troubling type of soot called ultrafine particles, which are found in vehicle exhaust. The pollutants are a tiny fraction of the width of a human hair, can lodge deep in the lungs and move into bloodstream and the brain, posing a health risk to people with respiratory and cardiovascular disease.

The study found that while concentrations of ultrafine particles in Boyle Heights are about three times higher than in West Los Angeles, they are even worse in the North Westdale neighborhood, where researchers detected concentrations between 10 and 20 times higher.

The levels vary so widely by neighborhood because ultrafine particles are short-lived and localized pollutants, researchers said. How much of them you breathe depends largely on the amount recently belched out by combustion engines nearby.

In one encouraging sign, the scientists detected a drop in ultrafine-particle pollution between 2008 and 2011. The improvement was most noticeable in West Los Angeles, a wealthier area where researchers suspect people are buying more new vehicles with cleaner, more efficient engines.

That’s not the case in Boyle Heights, where a higher proportion of older, dirtier cars and trucks continue to clog streets and freeways. That neighborhood, along with downtown, is also burdened by additional ultrafine particles from smog that blows in from the west, researchers found.

The study was not the first to pinpoint the neighborhood downwind of Santa Monica Airport for its high levels of ultrafine particle pollution, at least when aircraft are in operation. The problem has been the focus of past research by the same team of UCLA researchers and by the South Coast Air Quality Management District.

In previous studies, UCLA scientists have measured other local variations in air quality, including thesteep drop in pollution in West Los Angeles and Santa Monica during the weekend closure of a 10-mile stretch of the 405 Freeway in 2011, dubbed “Carmageddon.”