Posted by acox on Monday, 11 February 2013 in Air Quality 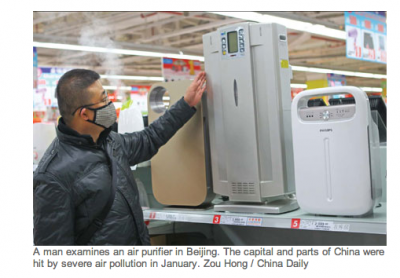 China's efforts to assess the problem of smog hanging over Beijing and other cities has meant business for Western providers of specialized air-monitoring equipment, and this could pick up with efforts to clear the skies.

"It's only recently that equipment able to monitor PM2.5 has been manufactured in China," says Jo Ann Choi Pottberg, director of global sales and marketing at Met One Instruments Inc. The Oregon-based maker of weather-related sensors, which expanded to China in 1992, supplies monitors to the US embassy in Beijing and consulates in Shanghai and Guangzhou.

PM2.5 is a type of fine particulate matter most commonly emitted by motor vehicles, especially diesel-powered trucks, and is harmful to human health. Many residents have suffered the discomfort of the so-called Beijing cough and donned protective face masks to walk outside.

On Jan 12 the air-quality monitor operated by the US embassy in Beijing recorded a PM2.5 level of 886 micrograms a cubic meter, nearly 35 times what the World Health Organization considers safe.

On Jan 27 the air pollution index reached 420 to 440 at six downtown districts of Beijing, according to the Municipal Environmental Monitoring Center. The capital and parts of China were beset by heavy smog for two weeks.

Outside Beijing, about 20 provinces were affected by a blanket of pollution, prompting authorities to maintain yellow alerts for smog and haze in central and eastern China, according to the website of the China Meteorological Administration.

With the pace of research and development into air-quality monitoring expected to accelerate, business in China for companies with expertise in this area is expected to rise.

"More than 70 percent of PM2.5 monitoring equipment used in China is made by overseas companies, most likely companies in the US," says Wang Yuesi, a researcher at the Chinese Academy of Sciences.

However, China is certain to speed up R&D into air-quality monitoring in response to the recent smog, he says.

Certification standards for monitors are strict. Because certifiable data is required, customers usually seek out monitors that meet criteria set by the US Environmental Protection Agency or European standards such as TUeV, MCerts or ENS. To become certified, companies must undergo reviews that are often lengthy because the equipment has to be tested in different seasons and locations, Pottberg says.