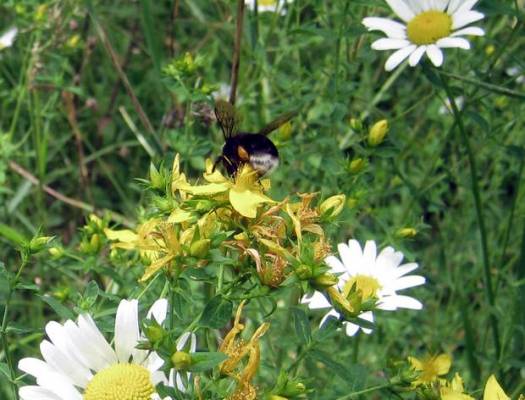 The bumblebee moving from flower to flower by the shores of Lake Pend Oreille had a distinctive white patch on its rear.

So a wildlife technician snapped a picture, documenting a sighting of a Western bumblebee in Bonner County.

Idaho Department of Fish and Game crews found three of the native bumblebees last summer while they were out conducting other field research. It’s the first effort in recent years to document the state’s native bee populations.

“I also had one in my yard,” said Michael Lucid, who’s heading up a Fish and Game initiative to document the range and abundance of Idaho’s native species. “I chased it around, but I couldn’t get a picture. So, I’m not including it in the official record.”

The three Western bumblebees were found in Bonner, Boundary and Shoshone counties, which indicates they’re widely distributed in the Idaho Panhandle, Lucid said. That’s an encouraging sign for the bumblebees, also known as “white-bottomed bees.”

But their population crashed during the 1990s, virtually disappearing from some parts of their range. Researchers suspect a combination of factors, including pesticides, shrinking habitat and introduced pests, which have also taken a toll on honeybees and other North American pollinators.

Fewer bumblebees and other pollinators is a concerning trend, said Rich Hatfield of the Xerces Society of Portland, a nonprofit focused on invertebrate conservation.

“Something like 85 percent of the world’s plants require insect pollination. That helps feed us to the tune of one in every three bites of food. It also feeds songbirds and mammals that eat fruits and nuts,” Hatfield said. “It’s one thing to have a rare species go extinct. But when you get these very common species in decline, it says something is not right out there in the world and we probably ought to be thinking about it.”

Western bumblebees have been affected by a European fungus, Nosema bombi , which spread from cultivated bumblebees that escaped from a greenhouse and infected wild bumblebees. Populations were hardest hit in the Sierra Nevadas and west of the Cascades, Hatfield said, though Western bumblebees were recently documented in a Seattle neighborhood after a long absence.

A warming climate could also be a factor in population declines, he said. Last year, Hatfield surveyed the Mount Hood National Forest for Western bumblebees. He found them only along the ridgelines, at the forest’s highest elevations.

Bumblebees are adapted to cold, northern climates, Hatfield said. Their life cycle is timed so the queen emerges in the spring when the wildflowers start blooming, but many wildflowers bloom earlier than they did in the past.

Last year’s Western bumblebee sightings in Idaho is a beginning of understanding more about pollinators’ presence in the state, said Fish and Game’s Lucid. Since the survey crews were focused on other wildlife research, the bumblebee sightings were incidental.

But he’s glad to be developing a record to add to the state’s database. In 1911, 47 sightings of Western bumblebees were recorded in the database. Before last year, they were last documented in the state in 2009, and the prior record dated back to 1987.

“We have very little information on pollinators in Idaho,” Lucid said. “It’s important that we get a feel for what our pollinator community looks like.”