Posted by tvernile on Wednesday, 09 April 2014 in Biofuels 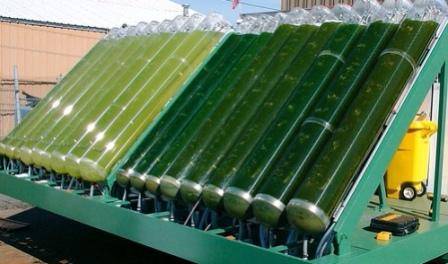 Fossil fuel use, even with the environmental and economic security challenges it poses, remains the dominant source of energy in the U.S. But its 80-percent share of the energy supply could be diminished in as little as five years. Scripps Institution of Oceanography and UC San Diego are taking the lead in developing an energy source that has the potential to be both cheaper and cleaner than fossil fuels: algae biofuels.

A new report issued by the U.S. DOE ranked algal biofuels research programs at UC San Diego as the two best in the country. A program at Scripps Institution of Oceanography was rated the best in the nation. Mark Hildebrand and his team in the Marine Biology Research Division at Scripps Institution of Oceanography received the top honor from among 28 algae technology groups for criteria that included technical progress, project relevance, and potential commercial applications. The report specifically cited the lab’s outstanding research in the genetic manipulation of algae to improve the yield of key components for biofuel production. Another UC San Diego research group, the UC San Diego Consortium for Algae Biofuel Commercialization (CAB-Comm), led by UC San Diego molecular biologist Stephen Mayfield, was recognized by the DOE as the No. 2-ranked research program.

“People sometimes don’t appreciate the differences between different classes of algae, and tend to think of them as one group,” Hildebrand said. “But there’s a billion years of distinct evolution between diatoms and green algae. And it turns out, diatoms are easy to manipulate genetically.”

Hildebrand’s lab is using genetic tools to control what goes on inside the cell wall. They’re developing genetic manipulations to maximize the diatom’s production of lipids, the fats that are used to produce biofuel. This is one of the most important challenges to algae biofuel production, because in a natural environment algae will use energy to produce carbohydrates and grow, and will only accumulate lipids when they aren’t growing.

“It’s actually very similar to humans,” Hildebrand said. “You load up on carbohydrates if you’re going for a run, and those carbohydrates will only turn to fat if instead of running you just sit around.”

Biologists like Hildebrand want to find ways to cheat nature, and get the algae to grow and accumulate lipids at the same time. Emily Trentacoste, a recent student co-advised by Hildebrand and William Gerwick, recently was able to “turn off” an enzyme in the diatoms that breaks down lipids for energy. With this breakdown mechanism disabled, the algae accumulated more lipids without slowing their growth.

Besides the relative ease with which their genes can be changed, there are other advantages to working with diatoms. One major advantage, especially relevant in drought-stricken California, is that diatoms can be grown in seawater, so they don’t place a burden on the state’s freshwater supply. Additionally, other research indicates that diatoms are able to produce at least as much, if not more, lipids than green algae. But diatoms aren’t the only algae class that shows potential for the future of energy, and many other labs are showing promising results with different organisms. Most of the exciting research using other organisms, including green algae and cyanobacteria, is coming from Hildebrand’s colleagues at UC San Diego.

“That’s one of the cool things about being here, there are people working in different classes of algae, all on the forefront of their fields,” Hildebrand said.

CAB-Comm is one such group. It partners with industry collaborators Sapphire Energy and Life Technologies, focuses on green algae and cyanobacteria, and was cited by the DOE for “demonstrating how the yield potential of algae can be preserved by controlling pests through development of resistant strains, use of chemical pesticides, and cultivation of consortia of strains.”

CAB-Comm was formed by UCSD and Scripps scientists who were originally part of an organization called the San Diego Center for Algae Biotechnology (SD-CAB) which has now evolved into the California Center for Algae Biotechnology (Cal-CAB). This year, Cal-CAB researchers led by Cameron Coates, a Ph.D. student in the Gerwick group at Scripps, published another major finding in the field of algae biotechnology. Coates studies cyanobacteria, one of the few organisms known to produce hydrocarbons directly. Most other algae produce lipids, which can then be converted to fuel, but cyanobacteria directly produce hydrocarbons of such high density that they can be used as jet fuel.

Coates established that all cyanobacteria produce hydrocarbons but only in small amounts and some cyanobacteria produce hydrocarbons through a completely unique pathway. These insights have opened the door for new research into maximizing their fuel production potential as well as identifying pathway targets that could be used to produce sustainable plastics and chemicals.

“As a grad student at Scripps, I’ve been really pleased with the opportunity to work with high caliber scientists and students; the resources and opportunities for intellectual growth have been excellent,” Coates said, “and in the CAB-Comm program there’s a real spirit of collaborative research and sharing of resources.”

The algae biofuel industry has grown significantly since CAB-Comm was founded in 2008 (it was then called the San Diego Center for Algae Biotechnology, SD-CAB), expanding from scientific to commercial interests. Its development is spurred in part by a desire to wean American dependence on foreign oil, but another motivation to develop algae biofuel is that it has the potential to cut carbon dioxide emissions in half, because the algae sequester carbon as they grow and partially offset the carbon released when the biofuel is burned. Cost is the main factor holding algae biofuel back, as it’s currently two to three times more expensive than fossil fuels, even when produced by the largest and most efficient operations. There are some indications that algae biofuel will be cost-competitive with fossil fuels within five years, but investment in large-scale production isn’t likely to happen until then. The recent boom in America’s natural gas production enabled by fracking could further dampen investor interest and slow the development of algae biofuels.

Although it may take time, Hildebrand and his colleagues are confident that algae biofuels will be an important part of our energy future. Biofuels, as liquid fuel, have important advantages over other alternative energies like wind and solar; they can be easily stored and integrated into current infrastructure, and modes of transportation such as aviation require high-density liquid fuels. This is part of why the U.S. Air Force, the U.S. Navy and commercial aircraft manufacturers such as Boeing have provided significant funding for algae biofuel research.

Scripps is also planning to begin tests using 100-percent renewable diesel fuel in research vessels starting with Robert Gordon Sproul in 2014. Scripps Associate Director Bruce Appelgate said the goal is to contribute to the development of a local, vertically integrated supply stream, with algal biofuels produced in San Diego and consumed by Scripps’s own research vessels. In addition to the benefit of being renewable and nearly carbon-neutral, renewable biodiesel results in cleaner emissions, thus improving air quality relative to fuels derived from petroleum, said Appelgate.

If algae biofuels do become an important industry, the contributions of scientists at UC San Diego and Scripps will have played an important role. Hildebrand credits much of the success of his research program to his students and postdocs.

“The quality of students and postdocs that come to Scripps is exceptional. It’s rare that students come here and don’t just shine,” he said. “It’s a level of dedication you can’t find anywhere else.”

Hildebrand and the founder of CAB-Comm, Scripps biologist Greg Mitchell, expressed hope that the high rankings from the DOE report will help secure future funding for their research. Hildebrand mentioned that having continuous funding over the past few years has helped him employ post-docs and students for longer periods of time, and build up expertise in the lab.

“We believe there should be continued investment in algae biofuel,” Mitchell said, “because it’s the only biofuel that can be scaled globally and solve many problems for sustainability and energy security.”