Posted by David on Thursday, 22 May 2014 in Wildlife Conservation 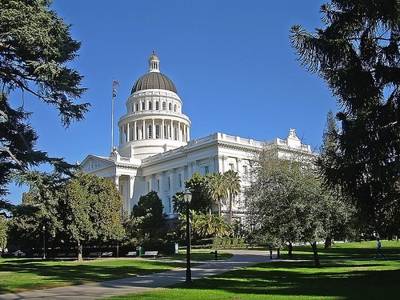 The state Capitol grounds are a bit less green this year, thanks to California's severe drought.

In an effort to save water, state landscapers are letting several lawns bordering the Capitol building die. The browning, patchy grounds have been dotted with signs alerting visitors to the water restrictions in place.

Brian Ferguson, a spokesman for the state Department of General Services, said withholding water for certain lawns, such as those at the north and west ends of the Capitol, will help the agency comply with Gov. Jerry Brown's call earlier this year for Californians to cut their water usage by 20%.

There have been other landscaping modifications stemming from the extended dry season: Certain flower beds have been left fallow this year, and inefficient sprinkler heads have led to the use of other watering methods, such as drip irrigation.

Still, the grounds aren't going to be entirely parched; in fact, watering via sprinklers began this month on approximately 85% of the lawns, which overlay tree roots.

There are nearly 1,000 trees on the 40-acre park--some more than 100 years old--and the sprinklers are part of the irrigation system that delivers water to the "historically significant' flora.

"While we must safeguard the historic trees and other unique plant assets of the park so that they can be enjoyed by future generations, we must also find forward-thinking ways to save water wherever possible," said Fred Klass, director of the Department of General Services, in a statement earlier this month.