Posted by plantitfilm on Thursday, 22 May 2014 in Climate Change

National Monuments at Risk Due To Climate Change 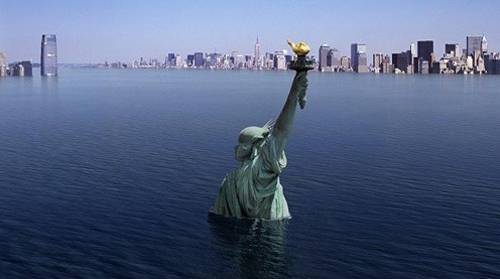 The growing consequences of climate change are putting more than two dozen of the most iconic and historic sites in the US at risk, according to a new report. From Ellis Island to the Everglades, Cape Canaveral to California's César Chávez National Monument, a lengthy list of treasured sites is being threatened by the effects of climate change, including rising sea levels and fires.

'National Landmarks at Risk', a report published by the Union of Concerned Scientists, identifies 30 at-risk locations that potentially face serious natural disasters. They also include the Statue of Liberty, Boston's historic districts, the Harriet Tubman National Monument in Maryland and an array of NASA sites including the Kennedy Space Center in Cape Canaveral, Florida.

The not-for-profit organization said the locations were chosen "because the science behind the risks they face is robust, and because together they shine a spotlight on the different kinds of climate impacts already affecting the United States' cultural heritage".

At some sites — such as Liberty and Ellis Islands and Cape Hatteras — steps have already been taken to prepare for these growing climate risks. At many other sites, such efforts have not yet begun.

"The imminent risks to these sites and the artifacts they contain threaten to pull apart the quilt that tells the story of the nation's heritage and history," said Adam Markham, director of climate impacts at the union. "We must prepare our cherished landmarks for these worsening climate impacts and take steps to make climate resilience a national priority. At the same time, we must work to minimize these risks in the future by reducing the carbon emissions that are causing climate change and its accompanying impacts."

The Society for American Archaeology, a non-profit dedicated to protecting the archaeological heritage of the Americas and the world, issued a statement today in conjunction with the report release, calling for more attention to be paid to preserving endangered archaeological sites, marking the first time the organization has sought to draw public attention to the damage climate change is causing.

According to the UCS report, at least one historic site — Jamestown, the first permanent English settlement in the Americas — is likely to be submerged by rising seas by the end of the century, as are at least portions of others, including the Harriet Tubman Underground Railroad National Monument in Cambridge, Maryland.

Without taking steps to preserve access, other sites also may become inaccessible to the public as sea levels rise.

“Fort Monroe in Virginia, which played a crucial role in the fall of slavery, will become an island unto itself within 70 years,” said Markham. “Castillo de San Marcos, in St. Augustine, Florida, also is extremely vulnerable.”The fort faces increasing risks from flooding and National Oceanic and Atmospheric Administration projections show that, without major engineering feats, grounds immediately surrounding the fort will become permanently inundated with three feet of sea level rise, the moderate range of what scientists project will occur by the end of the century. The National Park Service is using three-dimensional scans and videos to better inform how the agency preserves the fort and to document

it as it is for future generations.Rising seas and the threat of worsening storm surges also are endangering historic districts in Annapolis, Md., Charleston, S.C., and St. Augustine, Fla., pre-contact Native Hawaiian structures on the Big Island, and some of the most remarkable archaeological remains on Earth, according to the report.“Early Floridians constructed highly elaborate structures out of oyster and clam shells in the Ten Thousand Islands, dating back to 1,000 B.C.,” said Markham. “The Everglades is one of the only places in the world where entire communities — with canals, plazas and water courts — were built on top of wetlands out of oyster shells. And these sites face an imminent threat from climate impacts.”Across the peninsula in the northern part of Canaveral National Seashore, Turtle Mound, a more than 1,200 year old shell mound thought to be the highest in North America, also is endangered, according to the report. The National Park Service and the University of Central Florida have created an innovative

“living shoreline” of oyster mats, Spartina grass and mangroves to try to protect the mound from erosion.The Cape Canaveral area also is home to a historic site that marks a more modern first: the Kennedy Space Center, site of the Apollo launch. Storm surges regularly breach the dunes near the launch pads, and efforts to restore and protect the dunes have been undone by subsequent storms. NASA is now evaluating how climate change is affecting this and other sites in order to develop plans for their protection.Meanwhile, in Alaska, melting sea ice and thawing permafrost have allowed winter storms to erode the coastlines of Cape Krusenstern National Monument and the Bering Land Bridge National Preserve, in Kotzebue Sound, at an unprecedented rate.“Irreplaceable prehistoric artifacts are actually crumbling out of the shorelines in these Alaskan sites and washing out to sea,” said Markham.In the West, climate change is increasing the risk of large wildfires in places such as California’s Sierra Mountains by driving up temperatures, reducing winter snowpack, and drying out forests for longer periods. That spells trouble for historically significant structures in former Gold Rush country, including the Groveland Hotel named in the report.Cultural resources in the southwestern United States have been hit by a dual threat: intense, large-scale wildfires that are often followed by flooding rain events.“During the last decade and a half, massive fires have swept through Mesa Verde National Park and Bandelier National Monument and other southwestern sites, damaging ancient pueblo masonry, petroglyphs and pottery,” said Markham. “Heavy rains and the extraordinary floods that have followed some of these fires have caused even more damage, destroying trails, damaging adobe buildings and washing away vital archaeological resources. These sites face huge risks as the climate continues to change.”The damage caused by the 2011 Las Conchas fire and extreme rains that came after it are forcing the Pueblo of Santa Clara, named in the report — a federally registered Native American tribe and National Historic Landmark— to build retaining ponds before the monsoons hit this year, which may push the pueblo into bankruptcy. If the Pueblo doesn’t build the ponds, nearby communities could experience destructive flooding.The report also documents

examples of efforts to protect historic sites and make them more resilient to climate change, including work at the Statue of Liberty, the U.S. Naval Academy in Annapolis, Md., and the Cape Hatteras Lighthouse, in Buxton, N.C., which the National Park Service moved inland to save from sea level rise.To slow the rate of change and give archaeologists, historic preservationists and land managers more time to protect these sites, carbon emissions must be reduced, according to the report.“Cutting carbon emissions significantly and quickly can slow the pace of sea level rise, limit the temperature increases, and slow the expansion of the wildfire season,” said Angela Anderson, director of the Climate and Energy Program at UCS. In addition, Congress should fund President Obama’s proposed Climate Resilience Fund, which could be used to help municipalities and businesses