Posted by thatsenough on Friday, 08 August 2014 in Air Quality 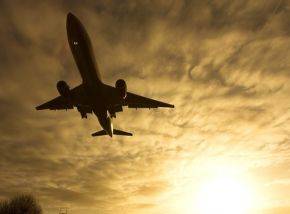 Carbon reduction efforts in the airline industry will be outweighed by growth in air-traffic, even if the most contentious mitigation measures are implemented, according to new research by the University of Southampton.

Even if proposed mitigation measures are agreed upon and put into place, air traffic growth-rates are likely to out-pace emission reductions, unless demand is substantially reduced.

"There is little doubt that increasing demand for air travel will continue for the foreseeable future," says co-author and travel expert Professor John Preston. "As a result, civil aviation is going to become an increasingly significant contributor togreenhouse gas emissions."

The authors of the new study, which has been published in the journal Atmospheric Environment, have calculated that the ticket price increase necessary to drive down demand would value CO2 emissions at up to one hundred times the amount of current valuations.

"This would translate to a yearly 1.4 per cent increase on ticket prices, breaking the trend of increasing lower airfares," says co-author and researcher Matt Grote. "The price of domestic tickets has dropped by 1.3 per cent a year between 1979 and 2012, and international fares have fallen by 0.5 per cent per annum between 1990 and 2012."

However, the research suggests any move to suppress demand would be resisted by the airline industry and national governments. The researchers say a global regulator 'with teeth' is urgently needed to enforce CO2 emission reduction measures.

"Some mitigation measures can be left to the aviation sector to resolve," says Head of the Centre for Environmental Science at the University of Southampton Professor Ian Williams. "For example, the industry will continue to seek improvements to fuel efficiency as this will reduce costs. However, other essential measures, such as securing international agreements, setting action plans, regulations and carbon standards will require political leadership at a global level."

The literature review conducted by the researchers suggests that the International Civil Aviation Organisation (ICAO) 'lacks the legal authority to force compliance and therefore is heavily reliant on voluntary cooperation and piecemeal agreements'.

Current targets, set at the most recent ICAO Assembly Session last October, include a global average fuel-efficiency improvement of two per cent a year (up to 2050) and keeping global net CO2 emissions for international aviation at the same level from 2020. Global market based measures (MBM) have yet to be agreed upon, while Boeing predicts the number of aircraft in service to double between the years 2011 and 2031.