Posted by tvernile on Monday, 25 August 2014 in Climate Change 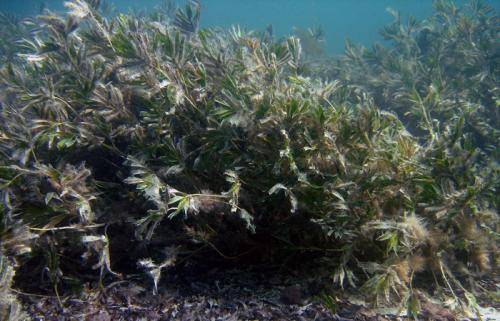 An unprecedented marine heat wave that swept the Southeast Indian Ocean in 2011 has given FIU scientists a glimpse into the future of climate change.

The heat wave caused the loss of more than 90 percent of the dominant seagrass in some regions of Shark Bay, Australia. Since seagrass meadows provide habitat for many ecologically important species and provide food for large grazers like turtles and sea cows, this dieback could have significant impacts on marine wildlife in the region, particularly the deteriorating health of green sea turtles. The heat wave also led to declines in scallops and blue manna crabs, triggering fishery closures for these species.

The findings, published in Global Change Biology in August, show that extreme climatic events, which are likely to become more frequent and intense under climate change, can abruptly restructure ecosystems if they disturb key habitat-forming species including seagrasses.

"When we think of climate change impacts on ecosystems, we often think they happen slowly over time, but we're increasingly seeing that extreme events can trigger abrupt shifts in ecosystem structure and function," said FIU marine sciences researcher Jordan Thomson, who led the study. "Increased temperature disturbances should be expected in this region in the future."

Using in-water surveys, harvested plants and video footage from cameras worn by Shark Bay's resident sea turtles, the FIU researchers along with researchers from the University of Western Australia found temperature extremes have the potential to trigger large-scale disturbances in seagrass ecosystems, and can impact the health of animals that are closely associated with seagrasses. While animal-borne video recorders have been widely applied to the study of animal behavior and ecology, this is one of the first studies to use them as a tool for monitoring ecosystem health from the perspective of large, free-ranging animals.

"We were able to detect a clear fingerprint of a warming event on the severe dieback of a temperate seagrass, showing that extreme temperatures alone are sufficient to produce abrupt, high-magnitude disturbances where foundation seagrasses occur near their thermal limits," Thomson said.

The research in Shark Bay is unique because this region is remote, well-protected and is relatively free of most human stressors. According to Mike Heithaus, co-author of the study and interim dean of FIU's College of Arts & Sciences, it is essential to determine how increasing levels of disturbance under climate change will interact with other common stressors, including pollution, overexploitation, habitat loss and fragmentation, to affect coastal marine ecosystems. The researchers hope to expand on their research and explore how declining shark populations, the primary predator of sea turtles, may interact with climate disturbance to influence these ecosystems in the future.

"We are learning that sharks—many of which are disappearing at an alarming rate—can be critical to ecosystem health," Heithaus said. "And they could be necessary for helping systems bounce back after getting knocked down by climatic events."