Posted by scarlett on Wednesday, 18 June 2014 in Wildlife Conservation

Marine reserves get a big boost at U.S. conference 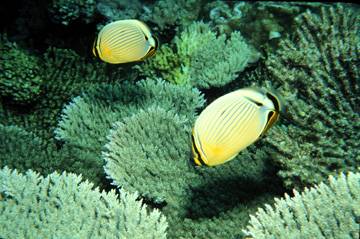 It’s been a good few days for marine conservationists.

On Monday, the island nation of Kiribati announced that it will soon end commercial fishing in the Phoenix Islands Protected Area (PIPA), a biologically-rich, California-sized swath of the Central Pacific.

Yesterday, President Barack Obama announced that he will take steps to expand the Pacific Remote Islands Marine National Monument in the south-central Pacific. The protected area currently covers 225,000 square kilometers, but White House officials suggest it could expand to cover some 1.8 million square kilometers, making it the largest reserve on the planet. And a number of other nations announced that they will create new reserves, expand protections for existing ones, or take other steps to protect marine life.

The bevy of announcements, which came during an “Our Ocean” conference organized by U.S. Secretary of State John Kerry in Washington, D.C., are drawing positive reactions from marine scientists and activists.

"Even those of us who are jaded by all of the talk over many years that hasn't been followed up by action are seeing something different here,” says marine biologist David Guggenheim, president of Ocean Doctor, a nonprofit group based in Washington, D.C.

Among the actions highlighted at the conference yesterday:

Obama’s plan to expand the Pacific islands reserve was greeted with relief. "Many of us in the marine community have been anxiously awaiting something from this administration that takes ocean conservation to a new level, and I think we're seeing it right now,” says Guggenheim.

The move "follows on 15 years of presidential attention on the oceans, starting with President [Bill] Clinton in 1998 with the National Oceans conference,” notes John Patlis, president and CEO of the National Marine Sanctuary Foundation in Silver Spring, Maryland. “We saw it with President [George W.] Bush, and now we're seeing it with President Obama, and it's really great news to have this kind of leadership from the U.S. on behalf of the ocean.”

The Obama administration’s move in the Pacific Remote Islands  aims to build on protections first established in 2009 by President George W. Bush, who created the reserve under the 1906 Antiquities Act, which gives the president the authority to restrict the use of territory owned by the federal government. While the Bush administration gave protection to the 50 nautical miles surrounding the seven U.S. islands in the area, the Obama administration is moving to extend protections out 200 nautical miles from shore, to the edge of the U.S. Exclusive Economic Zone. The action would increase the size of monument tenfold.

“The rationale for expanding these monuments from 50 to 200 nautical miles from the shoreline is not simply that big is better,” says Joshua Reichert, executive vice president of The Pew Charitable Trusts’ global environment program, in a statement. “Looked at as a whole, the expanded area is considered to harbor some of the most biologically diverse populations of marine life and intact ocean habitat in the world.” Pew has been a major force behind the creation of the Pacific reserves, working first with the Bush administration and now Obama to create and expand them.

The reserve is home to a rich array of wildlife, including large predatory fishes such as commercially valuable tuna, swordfish and marlin, five species of sea turtles, 22 species of protected marine mammals, and several million seabirds of 19 species. The reefs surrounding two of the islands -- Kingman and Palmyra -- are believed to contain the greatest known biomass of fish, and representation of apex predators, of any studied coral reef system on earth, according to Pew. (Palmyra is also home to a prominent marine biology research station operated by a coalition of foundations, museums and universities.)

The region is also home to countless species that scientists have yet to discover and describe. With the expansion of the monument, an estimated 241 seamounts—submerged mountain peaks--are expected to be under protection. Each one typically harbors many new species that are new to science.

The reserve expansion wasn’t the only marine-related move the Obama administration announced in recent days. The White House also announced a plan to combat black market fishing by requiring that all seafood in the U.S. be sustainable and traceable.  The initiative, which will include stepped up labeling and inspection efforts, is aimed at ending illegal, unreported and unregulated fishing, which is estimated to account for 20 percent of the value of world catches. Economists estimate the black market in fish produces between $10 billion and $23.5 billion in economic losses.

The administration has also announced that is re-opening to the public the process for proposing new U.S. marine sanctuaries. The National Oceanic and Atmospheric Administration, which oversees the U.S. sanctuary program, blocked public nominations in 1995, saying it didn’t have the resources to keep up. (Members of Congress and others could still nominate places they’d like to see protected.)

In statement released yesterday, the White House also highlighted other initiatives, including a new white paper on the impacts of ocean acidification, and a National Strategic Plan for Federal Aquaculture Research to provide a framework for coordination and collaboration across agencies.