Posted by Jentyl on Wednesday, 10 September 2014 in Food 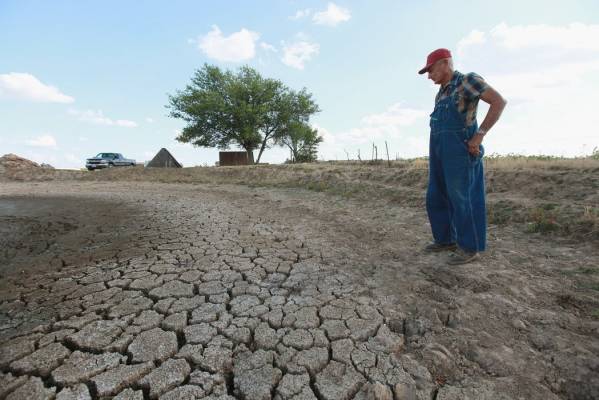 A worldwide weather phenomenon threatens the future of water and food supplies, as well as the global economy, experts say. Colombia, Pakistan, Somalia, Australia, Guatemala, China and Kenya are just a few of the other countries suffering severe drought conditions.

"The effects of droughts happen over time and aren't just a single event," said Lynn Wilson, academic chair at the online school, Kaplan University, and an environmental researcher. "When it comes to food and having safe drinking water, water is not an unlimited resource, and we have to manage it better across the globe."

Will Sarni, who is director and practice leader in water strategy and sustainability at Deloitte Consulting, said the full economic effect from the current global drought is just taking shape.

"We don't hear much about how water scarcity impacts where businesses locate," he said. "Water-rich states will be able to lure manufacturing and agriculture away from water-scarce nations. That can lead to limits in economic growth."

Droughts have plagued the earth for centuries. In fact, there's some debate over whether the recent spate of drought is different from the past.

"It's not the new normal," said Frank Galgano, professor of geography at Philadelphia's Villanova University. "It's impossible to disassociate the recent droughts with so-called cyclical events."

But what's clear to some analysts is that more severe weather episodes like drought are on the way.

"We'll see more droughts and floods in the decades to come," said LaDawn Haglund, a professor of justice and social inquiry at Arizona State University and an urban water expert. "Warming temperatures are changing when and where how much water falls from the sky."

Cost projections from the drought are hard to pin down, but the World Economic Forum (WEF) says that drought across the globe costs $6 billion to $8 billion a year from losses in agriculture and related businesses.

In California alone, the well-documented drought will cost the state $2.2 billion and put some 17,000 agricultural workers out of a job this year, according to a study from the University of California, Davis. California is easily the biggest agriculture-producing state in the United States.

The global nature of trade means that drought creates costs globally, even as trade helps to balance out shortages from one place to another. "The global drought means higher food shortage and higher prices across the board," said Will Delavan, professor of economics at Lebanon Valley College in Pennsylvania.

It's the use of groundwater supplies after surface wells have dried up that has helped keep food prices low for now. And the fact that so many economies are tied together globally has also tempered food price increases and shortages, said Josh Green, CEO of Panjiva, a supply chain research firm.

"A bad crop of, say, olives in Spain can be balanced out somewhere else in the world," Green said. "But the local impact of drought can't be ignored."

Something else that can't be ignored is the human cost of drought. The WEF reports that since 1900, global droughts have affected 2 billion people, leading to more than 11 million deaths.

With drought almost guaranteed, the issue, say experts, is how the world deals with dwindling surface and groundwater supplies. Solutions include more genetically modified organisms, or GMOs, of crops that are designed to grow in dry areas. There's also a need for better farming methods, as agriculture soaks up nearly 70 percent of all global water use.

"Some plants like corn, for example, use copious amounts of water," said Villanova's Galgano. "We need to change those crops along with using better irrigation methods."

Farmers and businesses need better tools to deal with drought, said Kenneth Cassman, professor of agronomy at the University of Nebraska. That includes better data about the weather.

Some businesses are stepping into the weather data gap. Omniearth is a company that, with its partners, uses satellites to gather a wide range of information including climate change and water use patterns.

"We have the capability to study how much water people are using," said Lars Dyrud, president and CEO of the company. "It helps business and communities plan for the future."

But what's needed most is placing a higher economic value on water, said Donald Wilhite, a professor of climate science at the University of Nebraska.

"We need to price it accordingly. When you turn on the tap and water flows, there's little recognition it's a finite resource," he said.

But getting people to realize that won't be easy, said ASU's Haglund, who just returned from Brazil, another country in a drought — the worst in 84 years.

"I was in Sao Paulo, and I saw at least one person every day washing their sidewalk or car with a garden hose at full blast," she said. "That's with the main reservoirs not even at 13 percent of capacity."

Also, putting a higher cost on water in drought-stricken countries like Kenya, with so much poverty, would hurt those who need the resource the most, said Kaplan University's Wilson. She said that families in the countryside there are leaving for the cities in order to escape the drought and the high cost of water.

What's missing in all the drought talk is advanced planning by political leaders, said the University of Nebraska's Wilhite, who puts a lot of blame on governments around the globe for failing to think beyond the last drought. That failure could bring on national security issues and heighten conflicts over water and food in the future.

But getting there won't be easy, said Villanova's Galgano, who argued that weather models suggest places in the world that have abundant water supplies now may experience water shortages in the future.

"It does not seem likely that we can realistically slow down population growth or the demands of economic growth that comes with it," Galgano said.