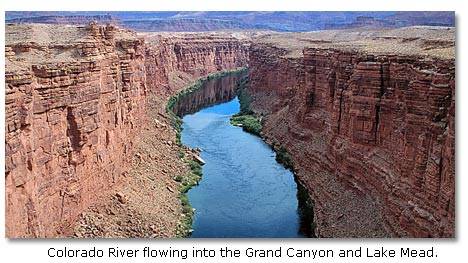 As water shortages grip California and the seven state Colorado River basin, many users feel no pain, while some face a complete curtailment. That’s because the water management system is not designed to be either efficient or equitable but consistent and predictable. And it is.

As is typical in issues that race from obscurity to the front page, much of the blame that has been assigned for this water shortage misses the mark, as people expound on issues they don’t truly understand. Everything from alfalfa exported to Chinese cows, fountains shooting into the Las Vegas sky and explosive population growth throughout the arid southwest has been faulted for the shortage. But it is policies that discourage cooperation and conservation that do much of the damage. One example is the “first come, first served” system – based on the prior appropriation doctrine.

The prior appropriation doctrine is the legal system that determines how scarce supplies are allocated among cities, farms, industry, the environment and any other potential water users. In this “first come, first served” system, if your ancestors homesteaded the family farm in 1860, then you are have the legal right, every year in perpetuity, to take your entire accustomed water supply before your neighboring farmer, whose family arrived in 1862, get their first drop. And both users stand in line ahead of the city founded in 1871, the mine that opened in 1898, or the wetland that was not legally recognized at all in this 19th century era of water allocation.

The “beauty” of the system is that you know the risks you face long before crisis hits, something that is essential information to individuals thinking about building new homes or plowing new fields. Arguably, western settlement would never have happened without this incentive system that protects the early arrivals. But you also understand that “water rights” and “water needs” are completely divorced, and when cooperation, sharing and compassion are most in need, you are likely to only get a parade of lawyers protecting the vested rights of their clients.

The situation isn’t hopeless. In Southern California, for example, the massive Imperial Irrigation District transfers water to drought-stricken communities in Los Angeles and San Diego. And on the Colorado River, the states today seem much more inclined to bargain than to litigate as some states run short while others are fine. This imbalance is, in large part, the product of an interstate allocation that was based on a flawed 1922 estimate of current and future water needs and supplies. There’s just enough flexibility in the system, and just enough financial incentives, to allow some water to be reallocated through water markets, but such efforts are slow, costly and controversial. And political leaders have been given just enough rope to speak of modest reforms, but only if they can guarantee no reduction to their constituent’s current water supplies.

But in a region facing drought, climate change and population growth simultaneously, the pace of change and the ambition of the proposals are too modest to head off some needless pain and suffering. In the meantime, the winners rejoice in their historically derived positions of power, the losers lament the perceived lack of equity and compassion and the general public demonizes farmers, fountains, immigrants, lawns and everyone from neighboring basins and states that continue to do nothing more than play by the established rules and incentives.

If you think we are “all in this together”, then you know nothing of how the system is designed to work.