Posted by jennystorie on Monday, 10 August 2015 in Earth Violators

We Are The Cause of Mass Extinction, So Now What? 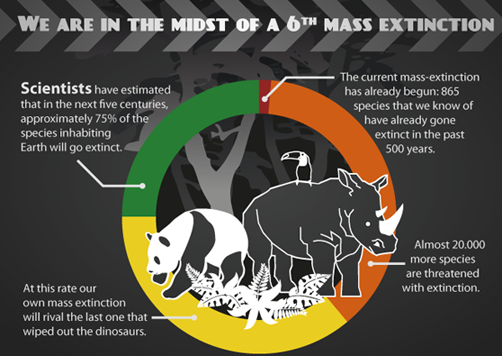 Due to climate change and the expansion of human civilization, the world is now in the midst of a sixth global extinction, and according to scientists, this time, we are the asteroid. It's What's Up In Climate Change.

The last major extinction event on Earth, the fifth in the planet's long history, took place 65 million years ago. A massive asteroid, now known as the Chicxulub impactor, which has been estimated at around 6.2 miles across, slammed into the water near the modern-day Yucatan peninsula.

The resulting firestorm that traversed the globe, and the climate change that occurred afterward - due to gases released during this conflagration and the die-off it caused, and the dust thrown into the atmosphere during the impact, which blotted out the Sun - claimed an estimated 75 per cent of all species on that were alive on Earth at the time, including the most, if not all, large dinosaurs.

Far from the largest extinction event in the fossil record (that would be the Great Permian Extinction, roughly 250 million years ago), the fifth extinction represented a fundamental shift in the planet's ecosystem.

Today, according to scientists, we are in the midst of the sixth major extinction event, known as the Holocene extinction. In this case, though, we - the human race - are the asteroid in this scenario.

One particularly alarming point the scientists raise in this month's Yale Climate Connections video (shown above), besides the alarming rate of loss of life on the planet and the extremely long recovery time Earth requires to recover from loss of biodiversity, is the loss of genetic information - survival information - that this reduction of biodiversity represents. The species lost - many of which we will never even know existed - contain an abundance of survival information locked away in their genetic code. This is information we could learn from, in order to enhance our own survival, but it appears as though, in many cases, we will never even have the chance.

However, opinions are mixed.

Those opposed to taking action on climate change are certainly taking it seriously enough, as several states intend to challenge the legality of the plan.

Some, such as Ryan Koronowski on ThinkProgress.org, point out that it is much better than the draft plan proposed in April, and while it isn't great, it may be as good as we can expect in the current political climate.

Others, like Michael Grunwald, on Politico.com, isn't as forgiving - acknowledging its merits over the April draft, but still saying it needed to go farther in order to live up to the hype.

The plan may not even survive long enough to make any kind of difference, depending on the impending legal battle against it, and depending on who wins the next US Presidential election.

However, David Ropeik, from BigThink.com, points out one aspect of this new plan that is truly significant:

There is a lot of opining about the Barack Obama administration’s plan to reduce greenhouse gas emissions from power plants. Most of these comments deal with the details; what does the plan do (for a good overview, see Brad Plumer at Vox), does it do enough (the reviews are decidedly mixed), and why does it prefer some forms of clean power — solar and wind — but not others - nuclear or CCS (a political sop to lefty environmentalists who helped write the plan).
But those narrow perspectives overlook something truly seminal about this important effort to deal with climate change; the fact that such a significant step is being taken in the first place. The EPA intervention to significantly reshape how America makes its electricity sends a loud, clear message that the argument about whether anthropogenic climate change is real, is essentially over. May that faux "debate," driven by ideology and fueled and funded by greed, rest in peace.

The Keeling Curve showing the last two years of global CO2 concentration in the atmosphere. Credit: Scripps Institution of Oceanography

It was just in the past week or so, as of Monday, July 27, that daily global carbon dioxide concentrations at Mauna Loa finally dropped below 400 parts per million, and only since Thursday, July 30 that hourly concentrations also consistently stayed below 400 ppm - the first time since February of this year. Not only does this continue the trend of about a 2-3 ppm rise in concentration per year, but it nearly doubles the amount of time CO2 levels remained above 400 ppm compared to 2014 - the very first year a monthly average over that level was ever recorded.