Posted by rackfokus on Monday, 10 August 2015 in Mining 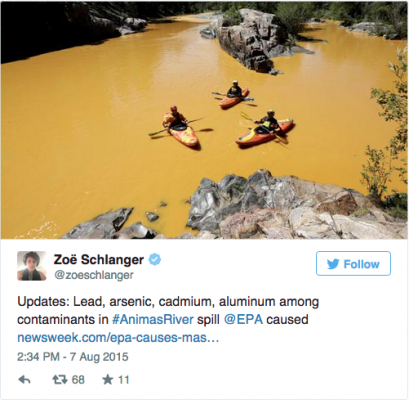 The Environmental Protection Agency took responsibility Friday for a massive wastewater spill that contaminated a Colorado river Wednesday, and warned locals to avoid the polluted waters.

According to a statement by the agency, an EPA cleanup team accidentally caused the spill while excavating the entrance to the Gold King Mine, an abandoned mine near Silverton in southwestern Colorado that had been leaking pollution.

While the crew was excavating, they breached a debris dam that had held the water inside the mine, allowing around 1 million gallons of toxic mustard-colored sludge to gush out of a mine tunnel and into the nearby Animas River, staining the river a bright yellow-orange color.

With testing still underway and heavy metal concentrations currently unknown, officials said Friday that it was too soon to know whether the waste poses a health risk.

Long-term exposure to lead and arsenic can be lethal to humans, though the toxins’ effects depend on concentration.

No drinking water contamination had been reported as of Friday evening, according to The Associated Press, and at least seven water utilities shut down their intakes in anticipation of the advancing plume.

EPA has warned people along the Animas to avoid contact with the contaminated water, and to keep pets and livestock out of the river. Portions of the river, which is a popular recreational destination, have been closed off by law enforcement, and officials warned agricultural users to shut off water intakes along affected portions of the river.

Officials also released extra water from a reservoir in order to dilute the pollution.

As of Saturday morning, the river had begun to clear up near the spill site, but contaminated water has continued downstream into northern New Mexico.

Even after the water has cleared, heavy metals may remain on the river bottom and may linger on beaches.

Water continues to seep from the mine, though more slowly than during the initial spill Wednesday. EPA says it is constructing settling ponds to hold and treat the water that is still flowing from the mine, and that it expects construction to be completed tomorrow morning.