Posted by archerzhh on Friday, 28 August 2015 in MyBlog

If You Think the Water Crisis Can't Get Worse, Wait Until the Aquifers Are Drained 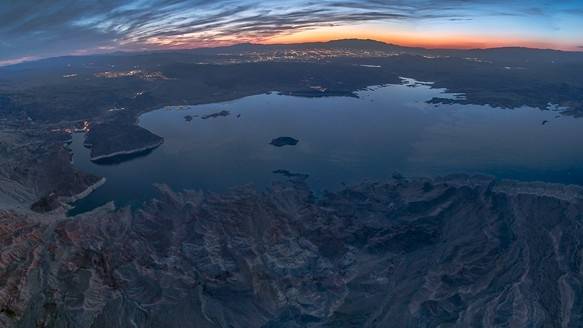 Aquifers provide us freshwater that makes up for surface water lost from drought-depleted lakes, rivers, and reservoirs. We are drawing down these hidden, mostly nonrenewable groundwater supplies at unsustainable rates in the western United States and in several dry regions globally, threatening our future.

We are at our best when we can see a threat or challenge ahead. If flood waters are rising, an enemy is rushing at us, or a highway exit appears just ahead of a traffic jam, we see the looming crisis and respond.

We are not as adept when threats—or threatened resources—are invisible. Some of us have trouble realizing why invisible carbon emissions are changing the chemistry of the atmosphere and warming the planet. Because the surface of the sea is all we see, it's difficult to understand that we already have taken most of the large fish from the ocean, diminishing a major source of food. Neither of these crises are visible—they are largely out of sight, out of mind—so it's difficult to get excited and respond. Disappearing groundwater is another out-of-sight crisis.

Groundwater comes from aquifers—spongelike gravel and sand-filled underground reservoirs—and we see this water only when it flows from springs and wells. In the United States we rely on this hidden—and shrinking—water supply to meet half our needs, and as drought shrinks surface water in lakes, rivers, and reservoirs, we rely on groundwater from aquifers even more. Some shallow aquifers recharge from surface water, but deeper aquifers contain ancient water locked in the earth by changes in geology thousands or millions of years ago. These aquifers typically cannot recharge, and once this "fossil" water is gone, it is gone forever—potentially changing how and where we can live and grow food, among other things. 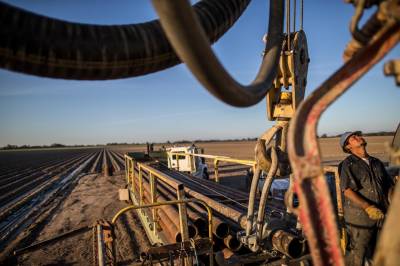 California's Central Valley has seen a dramatic rise in well-drilling this year to compensate for surface water lost from the drought.

A severe drought in California—now approaching four years long—has depleted snowpacks, rivers, and lakes, and groundwater use has soared to make up the shortfall. A new report from Stanford University says that nearly 60 percent of the state's water needs are now met by groundwater, up from 40 percent in years when normal amounts of rain and snow fall.

Relying on groundwater to make up for shrinking surface water supplies comes at a rising price, and this hidden water found in California's Central Valley aquifers is the focus of what amounts to a new gold rush. Well-drillers are working overtime, and as Brian Clark Howard reported here last week, farmers and homeowners short of water now must wait in line more than a year for their new wells.

In most years, aquifers recharge as rainfall and streamflow seep into unpaved ground. But during drought the water table—the depth at which water is found below the surface—drops as water is pumped from the ground faster than it can recharge. As Howard reported, Central Valley wells that used to strike water at 500 feet deep must now be drilled down 1,000 feet or more, at a cost of more than $300,000 for a single well. And as aquifers are depleted, the land also begins to subside, or sink.

Unlike those in other western states, Californians know little about their groundwater supply because well-drilling records are kept secret from public view, and there is no statewide policy limiting groundwater use. State legislators are contemplating a measure that would regulate and limit groundwater use, but even if it passes, compliance plans wouldn't be required until 2020, and full restrictions wouldn't kick in until 2040. California property owners now can pump as much water as they want from under the ground they own.

California's Central Valley isn't the only place in the U.S. where groundwater supplies are declining. Aquifers in the Colorado River Basin and the southern Great Plains also suffer severe depletion. Studies show that about half the groundwater depletion nationwide is from irrigation. Agriculture is the leading use of water in the U.S. and around the world, and globally irrigated farming takes more than 60 percent of the available freshwater.

The Colorado River Basin, which supplies water to 40 million people in seven states, is losing water at dramatic rates, and most of the losses are groundwater. A new satellite study from the University of California, Irvine and NASA indicates that the Colorado River Basin lost 65 cubic kilometers (15.6 cubic miles) of water from 2004 to 2013. That is twice the amount stored in Lake Mead, the largest reservoir in the U.S., which can hold two years' worth of Colorado River runoff. As Jay Famiglietti, a NASA scientist and study co-author wrote here, groundwater made up 75 percent of the water lost in the basin.

Farther east, the Ogallala Aquifer under the High Plains is also shrinking because of too much demand. When the Dust Bowl overtook the Great Plains in the 1930s, the Ogallala had been discovered only recently, and for the most part it wasn't tapped then to help ease the drought. But large-scale center-pivot irrigation transformed crop production on the plains after World War II, allowing water-thirsty crops like corn and alfalfa for feeding livestock.

But severe drought threatens the southern plains again, and water is being unsustainably drawn from the southern Ogallala Aquifer. The northern Ogallala, found near the surface in Nebraska, is replenished by surface runoff from rivers originating in the Rockies. But farther south in Texas and New Mexico, water lies hundreds of feet below the surface, and does not recharge. Sandra Postel wrote here last month that the Ogallala Aquifer water level in the Texas Panhandle has dropped by up to 15 feet in the past decade, with more than three-quarters of that loss having come during the drought of the past five years. A recent Kansas State University study said that if farmers in Kansas keep irrigating at present rates, 69 percent of the Ogallala Aquifer will be gone in 50 years. 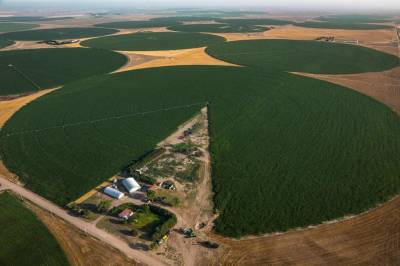 The Ogallala Aquifer supplies the water for center-pivot irrigation on farms in western Kansas.

This coincides with a nationwide trend of groundwater declines. A 2013 study of 40 aquifers across the United States by the U.S. Geological Survey reports that the rate of groundwater depletion has increased dramatically since 2000, with almost 25 cubic kilometers (six cubic miles) of water per year being pumped from the ground. This compares to about 9.2 cubic kilometers (1.48 cubic miles) average withdrawal per year from 1900 to 2008.

Scarce groundwater supplies also are being used for energy. A recent study from CERES, an organization that advocates sustainable business practices, indicated that competition for water by hydraulic fracturing—a water-intensive drilling process for oil and gas known as "fracking"—already occurs in dry regions of the United States. The February report said that more than half of all fracking wells in the U.S. are being drilled in regions experiencing drought, and that more than one-third of the wells are in regions suffering groundwater depletion.

Satellites have allowed us to more accurately understand groundwater supplies and depletion rates. Until these satellites, called GRACE (Gravity Recovery and Climate Experiment), were launched by NASA, we couldn't see or measure this developing invisible crisis. GRACE has given us an improved picture of groundwater worldwide, revealing how supplies are shrinking in several regions vulnerable to drought: northern India, the North China Plain, and the Middle East among them.

As drought worsens groundwater depletion, water supplies for people and farming shrink, and this scarcity can set the table for social unrest. Saudi Arabia, which a few decades ago began pumping deep underground aquifers to grow wheat in the desert, has since abandoned the plan, in order to conserve what groundwater supplies remain, relying instead on imported wheat to feed the people of this arid land.

Managing and conserving groundwater supplies becomes an urgent challenge as drought depletes our surface supplies. Because groundwater is a common resource—available to anyone with well—drilling equipment-cooperation and collaboration will be crucial as we try to protect this shrinking line of defense against a future of water scarcity.

Dennis Dimick grew up on a hilly Oregon farm named Spring Hill, where groundwater from a spring provided his family's—and the farm's—water supply. He is National Geographic's Executive Editor for the Environment. You can follow him on Twitter, Instagram, and flickr.