3 Ways the U.S. West Can Adapt to Deep Drought 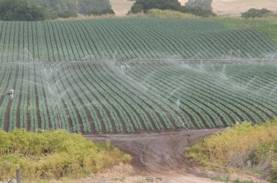 Unlike its golden-brown neighbor further south, Washington state was blessed with relatively generous storms over winter. But, as was the case in drought-stricken California, the naturally wild whims of Pacific Ocean winds conspired with a touch of global warming to bask the Evergreen State in unusual wintertime warmth. Instead of snowfall, Washington residents huddled under winter rains, and what little snowpack accumulated has been quickly wasting away.

Without those snowpacks, Washington is staring down a brutal summertime drought—despite the productive lashings of wintertime storms. Unlike the freakish situation in California, where several years of low snowfall and rainfall are serving as a reminder of the tremendous natural variability in Pacific-influenced weather, and the need to always be vigilant when it comes to managing water supplies, the situation in Washington resembles the parched climate-changed normal for swaths of the West in the decades ahead.

“The usual climate here is that we come out of winter with a pretty good snowpack, and then that slowly melts over spring into summer,” State Climatologist Nick Bond said. “This is a test case for how it’s going to be in the future.”

The current Washington drought could help the West learn to adapt to one of the most profound effects that climate change is projected to bring to the region. Scientists warn that climate change could deliver “megadroughts” to the West, the likes of which haven’t been experienced in more than a millenium. “I’m seeing this year as a dress rehearsal for the future,” Amy Snover, director of the University of Washington’s Climate Impacts Group, said.

Water managers are looking to replace the projected losses of snowpacks, which serve as natural reservoirs, with new and expanded ways of storing water.

The most obvious solution, however, may also be the least feasible—building new reservoirs and expanding existing ones. Reservoirs release climate-changing methane, inundate ecosystems and obstruct rivers that salmon and other wildlife use for migration and hunting, leading to public opposition and environmental clearance hurdles that many regard as insurmountable.

But that doesn’t mean there aren’t solutions to storing more water.

“‘Storage’ encompasses a lot of measures beyond new reservoirs, many of which are likely to be far more cost-effective,” Natural Resources Defense Council water expert Kate Poole said. “We have a lot of opportunity to increase storage at the household and business level, by expanding use of rain barrels, cisterns, and swales to capture runoff more effectively.”

Recycled water, including treated sewage, can be used on gardens and in industrial processes instead of being flushed into rivers and oceans, alleviating pressure on potable water supplies.

Poole and others also note that tremendous water storage potential lies beneath the feet of Westerners. Underground aquifers are being pumped at unsustainable rates, largely for use on farms. During a recent decade, enough groundwater to fill Lake Mead and Lake Powell combined was pumped out of the Colorado River Basin. Replenishing those aquifers during wet times could provide storage and improve the sustainability of groundwater pumping.

“The best option for new storage is not surface storage, but groundwater storage,” Peter Gleick, a water expert and president of the California-based nonprofit Pacific Institute, said. “It’s sort of like surface reservoirs—you’re storing water, but you don’t have to build a dam, you don’t have to destroy another river, and you don’t have to worry about evaporative losses.”

Such an approach is being tested southwest of the city of Bakersfield, Calif., where the Kern Water Bank is capturing surplus water supplies beneath the ground.

The drought in California has become so dire that Gov. Jerry Brown (D) recently announced the first mandatory water restrictions affecting cities and towns in the state’s history. Farms had already seen their water supplies from state and federal reservoirs severely curtailed.

Such regulations can help reduce demand for water—but there are other ways. Pacific Institute research suggests that farms, which consume most of the water used in California, could reduce their water use in the state by a fifth just by modernizing their irrigation practices. A report published last year by the Pacific Institute and NRDC showed that businesses and homes could reduce their water use by more than half by installing efficient bathroom and kitchen fittings, fixing leaks and replacing lawns with hardy native plants.

“There’s a lot of rigidity in the way we manage our water systems,” the University of Washington’s Snover said.

Changing such systems would involve changing entire legal frameworks in place in Western states. Brown recently hinted that California might attempt such reforms, and Idaho has already instituted some such changes. Idaho’s water resources board describes its Water Supply Bank as a “water exchange market” designed to “encourage the highest beneficial use of water” while raising new sources of revenue.

Idaho’s system is “only possible with new institutional flexibility,” Snover said—flexibility that other states may also need to adopt as they stare down water futures that are very different from their pasts.