Posted by August on Sunday, 21 February 2016 in Fossil Fuels 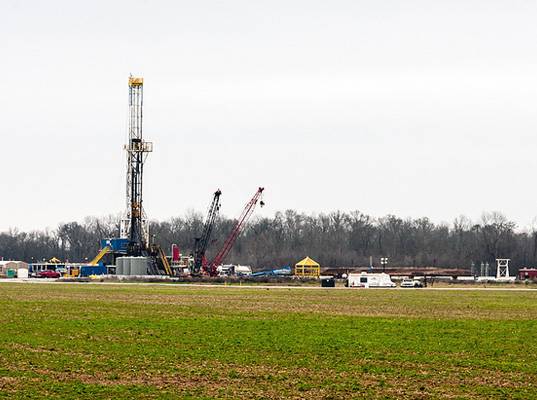 In the midst of the oil industry’s downturn, many Oklahoma companies associated with oil and gas have been feeling the pinch.

Shane Bode is the president of Leviathan Inc. in Fairview. The company manufactured fracking equipment for oil companies for eight years.

“Once it’s in your blood, you have to,” Bode said.

But in early 2014, his business was hit hard when the oil industry took a turn for the worse.

“I mean, we had contracts for six units," Bode said. "Altogether, a total of about $4.5 million that we lost in one day."

Eager to stay above water, he decided to take on a whole other animal -- making farming equipment instead. Bode said their business soon began manufacturing hay beds.

“We wanted to just do one piece at a time, then we’d do the arm beds and the spike beds and then we’re going to do cake feeders and hay trailers,” Bode said. “We just keep going, that’s all we know how to do.”

Despite some growing pains, he said his company has been able to stay afloat. Bode said that would not have been the case if they hadn’t switched gears.

“They would have had the auction already. It’s that simple,” Bode said.

While not all businesses associated with oil have been able to withstand the industry’s downturn, Bode said he’s blessed he’s been able to take his business into a different direction.

“There are hundreds of companies that are trapped,” Bode said. “We just happen to be lucky enough that we can.”

Bode said once the oil industry bounces back, they hope to go back to making fracking equipment.

However, he said his company will still continue to make farming equipment as well.