Posted by ep-admin on Tuesday, 08 February 2011 in Oil Spill

Take Action for the Earth and our Communities April 20. 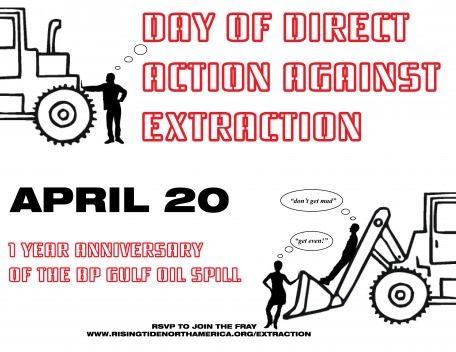 The BP oil spill was unfortunately just one of an endless string of disasters born of an economic system that must endlessly consume the Earth’s  resources.

For a stable climate, clean air and water, we must stop the extraction of fossil fuels and other “resources.”  From the tar sands of Alberta to the Gulf Coast, people are fighting back against the extractiveindustries  that have declared war on our planet. Rising Tide is calling for a day of direct action against extraction on the 1 year anniversary of the BP oil spill.

On April 20th take it to the point of production.  Shut down a well site, occupy a mine, take over an office, blockade a bank. Nobody’s community should be a sacrifice  zone.

For climate justice and a livable planet,