Posted by thatsenough on Monday, 22 February 2016 in Climate Change

2016 Already on Track to be the Hottest Year on Record 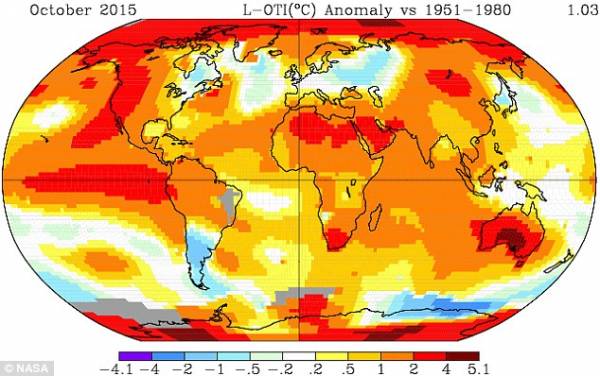 Here we go again. For the surface of planet Earth, 2015 was the hottest year on record by a stunning margin. But already, 2016 is on track to beat it.

Last month was the hottest January in 137 years of record-keeping, according to data released Wednesday by the National Oceanic and Atmospheric Administration. It was the ninth consecutive month to set a new record.

To be sure, some of the recent extremes are the result of a monster El Nino weather pattern that still lingers in the Pacific Ocean.

But the broader trend is clear: We live in a world that is warming rapidly, with no end in sight. Since 1980, the world has set a new annual temperature record roughly every three years. Fifteen of the hottest 16 years ever measured are in the 21st century.

Results from the world’s top monitoring agencies vary slightly, but NASA, NOAA, and the Japan Meteorological Agency all agree that January was unprecedented.

The El Nino weather pattern that started last year produced some of the hottest temperatures ever witnessed across great swaths of the equatorial Pacific.

By some measures, this may now be considered the most extreme El Ninos on record. It has triggered powerful typhoons, spoiled harvests in Africa, and contributed to vast fires in Indonesia.

In California, residents are bracing for more floods over the coming months.

The heat in January was experienced differently around the world. There were colder-than-normal patches in parts of the United States, Europe and Asia, but they were overwhelmed by “off our chart” warming in the Arctic region, according to NOAA climate scientist Jessica Blunden. Arctic ice levels fell to the lowest on record for this time of year. Siberia, northwest Canada, and a lot of Alaska were at least 9 degrees Fahrenheit (5 degrees Celsius) warmer than normal, she said.

While El Nino conditions appear to have peaked, they may continue to a lesser extent through late spring or early summer, according to the U.S. Climate Prediction Center. Then it is pretty much a coin toss whether the Pacific returns to more neutral temperatures or even a cooler La Nina pattern.

The heat that is dispersed into the atmosphere during an El Nino can linger, which means there is a decent chance 2016 will turn out to be the third straight year to set a new temperature record. That has never happened before.