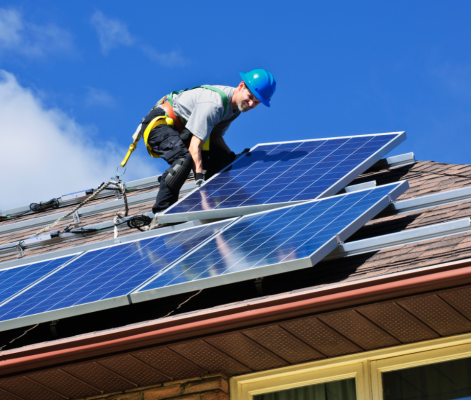 Making use of renewable energy in the home is a fairly new concept for most of us homeowners. While we know that the installation of solar power systems has increased exponentially in recent years in American homes (with current installations providing more than 20 gigawatts of power as compared to only 1.2 gigawatts in 2008), many of us still have our doubts regarding a variety of factors concerning solar power. But here are five of the top misconceptions about residential power, how they can potentially harm solar adoption rates, and what we can do to help curb these myths.

As is often the case with new technology, the general public’s impression of residential solar power varies greatly. Ranging from completely on board to not at all convinced, homeowners seem to have varying viewpoints about solar panels. Here are just a few of the most common misconceptions about solar.

It’s expensive to set up

The initial purchasing and installation costs of solar power put off more potential buyers than any other factor. In reality, setup costs are constantly decreasing as companies use less expensive materials and charge less for installation, and as a variety of financing options becomes available across the country (including but not limited to leases, government funding, and other subsidies). Furthermore, the initial cost of solar power is offset by massive energy savings over time.

Solar only works when it’s sunny

People in more variable climates may not want to install solar panels because of inclement weather and unreliable sunlight. As even we at Modernize were surprised to find out, this is simply untrue. While solar panels do generate more power in sunlight, they still function perfectly well even when the sky is cloudy. If you still need convincing, the number one user of solar power is Germany (a country with a less than tropical climate, to say the least).

I should wait until technology develops further

The idea that solar technology is too new leaves potential buyers thinking that if they purchase solar now, the technology will change and leave them in the energy-saving lurch. While solar technology is still developing, it has come a long way—and both productivity and energy efficiency are at their highest rates yet. Now is the ideal time to invest in solar, when these statistics are so favorable.

Solar won’t save me enough money

Savings over time need to be high in order for homeowners to invest in any alternative energy source, so many people are put off by waiting for savings. Fortunately, figures consistently demonstrate that savings are significant across the board after the panels have been paid off (roughly 10 to 20 years for most buyers). Five years ago in 2011, Pure Energies predicted that the average American home saved around $20,000 of their net electricity costs over 20 years, so this savings is most likely higher for 2016. If potential buyers are still not convinced of these savings, it should be noted that solar has no input costs (the sun is free!) compared to traditional coal and gas energy systems.

Many homeowners shy away from installing solar because they think systems appear unattractive and cumbersome, decreasing their home’s curb appeal and negatively affecting their home’s potential resale value. This is untrue for several reasons. First, many buyers would jump at the chance to buy a home with pre-installed solar or other renewable energy sources, so panels could actually help sellers here. Second, constantly developing technology means that systems are sleeker and more attractive than their ancestors, with options for no-grid panels, alternative panel colors, and thinner designs.

How to overcome these misconceptions

While these solar myths have and continue to put some homeowners off purchasing panels for their home, the truth is beginning to come out. The only real way to overcome these misconceptions about solar power is to take the leap and invest. Spread the word, boasting about your decreased carbon footprint and huge savings. With any luck, you might just change the minds of a few reluctant buyers.