Posted by wadenorris on Sunday, 31 July 2016 in Climate Change 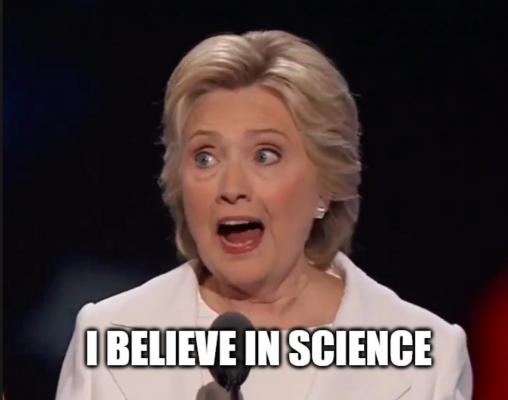 Hillary Clinton made history when she became the first woman to lead a major presidential ticket. In a speech filled with reminders of her experience and her plans for reform, one remark stood out: “I believe in science!” she said, chuckling. “I believe climate change is real, and that we can save our planet while creating millions of good paying clean energy jobs.”

Delegates filling the convention hall in Philadelphia roared in approval. Pockets of Twitter, too. Just as quickly, though, reactions turned cynical: How awful it is, in this day and age, that a presidential candidate must say she believes in science? In the retelling, Clinton’s laugh became a nod to the absurdity of the moment.

Yes, it’s absurd that a presidential candidate has to explicitly declare an allegiance to science. But the problem with what Clinton said runs deeper. Science is not a philosophy or a religion. It is a method—imperfect, yet powerful—of testing and accumulating knowledge. It’s not something you believe. You can believe that the scientific method is a good way of amassing knowledge. You can use that knowledge to shape policy.

Yet that’s not how American politics—especially in this election—talk about science. “When people say ‘Do you believe in climate change or global warming,’ that is the wrong framing,” says Cristine Russell, a veteran science reporter now at Harvard’s Kennedy School of Government. “Science is not a belief system.”

Of course, the word “science” has come to represent much more than the scientific method. More than ever, it shapes American culture and is a subculture unto itself. To be giddily fascinated and informed by the discoveries of neuroscientists and physicists and climate scientists is a privilege. When Clinton says she believes in science, she’s using the language of a community, fostered by the Internet, that builds cachet out of scientific curiosity. A love for the products of science has become cultural currency.

It has also become political shorthand. Both US political parties have adopted positions on issues informed by science, and as those issues have become more divisive and the positions more extreme, some people have characterized them as either “pro-science” or “anti-science.” But of course the platforms don’t actually have anything to do with science as a practice. Both sides may choose different evidence to rely on, or interpret that evidence differently. At the extremes, some groups may ignore evidence entirely.

Nowhere is that divide more apparent than climate change. The science here has reached all-but-inescapable conclusions. Some policymakers, primarily liberal, have formed policies that depend upon those conclusions. Others, mostly conservative, have made policies that dispute those conclusions (for all kinds of different reasons). But to the public, that divide now gets framed in terms of acceptance and denial—states of belief. “The idea that you can believe your own facts is an unfortunate consequence of the whole climate denial movement,” says Russell.

And now the Democrats have adopted those same words and tactics. The party platform echoes Clinton’s belief framework: “Democrats believe that climate change poses a real and urgent threat to our economy, our national security, and our children’s health and future.” In a short film shown at the convention on Wednesday, director James Cameron explicitly focused on an emotional message about the dangers of a warming climate to target swing voters.

Clinton’s line suggests that she’s at least in on the joke. It was a laugh line—offset by a pause, thrown out in a mocking, sing-song voice: “And I-I-I believe in science!” She’s intentionally using emotional rhetoric, both as a jab at her opponents and a signal to supporters.

But even if Clinton understands how silly it is to conflate belief in science with belief in the products of the scientific method, her line is still problematic. Clinton’s target is Donald Trump, who has claimed that climate change is a hoax—that the evidence for it isn’t real, or true. But Republicans could hear her tone as mocking not their candidate, but them.

People who remain unconvinced that humans are a significant contributor to climate change are not necessarily anti-science (whatever that means). Many have simply grown distrustful of climate scientists and their relationship with the government. They’re not wrong to be skeptical. Science in its purest form is the best method humans have yet come up with to apprehend the world around them. But it’s humans who execute it—people with hopes and dreams and fears. To deny the potential for bias is to marginalize a huge number of potential voters who have doubts, or who hope scientists describing an impending apocalypse are wrong.

Clinton did not say that she believes in science unequivocally—she likely understands the imperfections in the research she uses to guide her policy positions. But by playing the science card for laughs, she risks alienating the voters she’s trying to attract. In this narrative, not only does Clinton become the candidate of the “pro-science” voters, but she validates the opposition of people who think science is just another way of knowing.

To reinforce the idea of science as something you can believe or not believe, to force Americans into “pro-science” and “anti-science” camps, robs science of its power. It changes the practice of science from a method for understanding into a dangerous political weapon. And in the end, that makes science smaller. At its best and most objective, science can heal divides, answer questions, solve problems. It’s not a talking point.