Posted by archerzhh on Thursday, 30 July 2015 in Climate Change 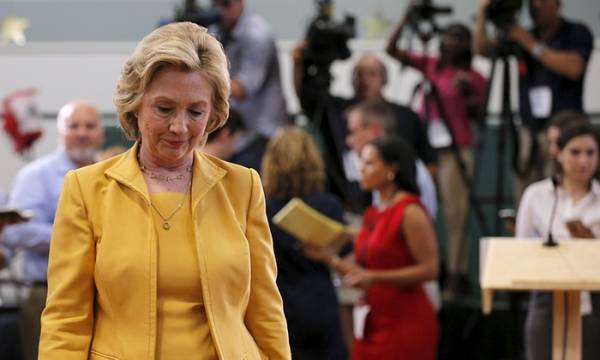 Hillary Clinton’s pledge on Sunday to support renewable energy and boost subsidies for solar panels was set up as a great unveiling – the Democratic frontrunner’s first public remarks on how her presidency would tackle climate change.

“I personally believe climate change is a challenge of such magnitude and urgency that we need a president who will set ambitious goals,” she said in a video posted to her campaign website.

It wasn’t difficult to draw a sigh of relief from the progressive electorate that has heard only climate change denial – loud and triumphal – from Republican frontrunners. (Ted Cruz proudly announced in May that he had just come from New Hampshire, where there was “ice and snow everywhere”. Trump took up the issue with typical savoir faire on Monday, declining to call climate change by name: “I call it weather.”)

But for many who study climate change, Clinton’s proposal lacked the ambition and sense of urgency appropriate to the scale of the problem.

In her initial policy proposal, Clinton pledged tax incentives that would help install half a billion solar panels nationwide within four years of taking office. She also pledged that the US would generate enough renewable energy to power every home in the country by 2027.

Environmentalist Bill McKibben said that while Clinton’s support for solar was necessary, it was far from a comprehensive energy policy. “Much of the impact of her climate plan was undercut the next day by her unwillingness to talk about the supply side of the equation,” he said. “Ducking questions about the Canadian tar sands or drilling in the Arctic makes everyone worry we’re going to see eight more years of an ‘all of the above’ energy strategy, which is what we do not need to hear in the hottest year ever measured on our planet.”

“It’s just plain silly,” said James Hansen, a climate change researcher who headed Nasa’s Goddard Institute for Space Studies for over 30 years. “No, you cannot solve the problem without a fundamental change, and that means you have to make the price of fossil fuels honest. Subsidizing solar panels is not going to solve the problem.”

Last Thursday, Hansen, along with 16 prominent climate change scientists, published a discussion paper in the journal Atmospheric Chemistry and Physics, where it will be publicly peer-reviewed. The paper suggests that previous models for climate change are too conservative and that a sea level rise of several meters might swallow up our coasts in this century, if governments fail to rapidly and substantially diminish fossil fuel emissions. “The economic and social cost of losing functionality of all coastal cities is practically incalculable,” the authors wrote.

The paper was rushed to publication in an attempt to get out in front of the Paris climate talks in December, where nations are invited to bring proposals that might curtail global warming.

Hansen said the problem climate experts face is that no prominent politician in the US has backed policy that has any shot at preventing an average of 2C (3.6F) of warming in this century, a widely agreed upon point of no return for climate change.

According to the Intergovernmental Panel on Climate Change (IPCC) a global temperature rise of great than 2C would result in irreversible damage to society, including “increasingly dangerous forest fires, extreme weather, drought” as well as other compounding climate impacts.

Despite commitments to combat climate change, under Barack Obama the US became the largest oil-producing nation in 2012, overtaking Saudi Arabia and Russia, by producing at full capacity.

“We have two political parties, neither one of which is willing to face reality,” said Hansen, who now heads up the Climate Science, Awareness and Solutions Program at Columbia University. “Conservatives pretend it’s all a hoax, and liberals propose solutions that are non-solutions.”

Clinton’s outline would put the US on track to supply 33% of the country’s electricity needs through renewables by 2027. That’s a mere 8% improvement over Obama’s plan.

It’s not enough, according to Hansen. Renewables are a part of how the US will wean itself off fossil fuels, but the market has to be allowed to determine which combination of renewable fuels – not just solar – makes the most sense in each region. “You can’t just legislate that,” said Hansen. Clinton’s plan “is going to make energy more expensive. You need to let energy efficiency and renewables and nuclear power and anything else that comes up compete.”

Hansen emphasized that whatever domestic policy we adopt towards climate change has to have a global reach, a key point absent in the solar proposal. “In places like China and India, they have to move off of coal for electricity pretty rapidly or the world is screwed.”

Hansen said a credible candidate on climate change would be talking about policy that would allow the price of fossil fuels to rise gradually. “You have to recognize that as long as fossil fuels appear to be the cheapest energy, we’ll just keep burning them,” he said.

Hansen said that a president committed to halting climate change would implement a gradually rising fee for fossil fuel extraction, collected from the fossil fuel companies at the domestic mine or port of entry. In order to keep the policy revenue-neutral, the fee would be evenly distributed back to US citizens in the form of a tax dividend, completely offsetting the rise in energy costs for most consumers. Those with large carbon footprints – like the very rich, with multiple large homes, for example – would bear the brunt. In that way, market forces would be allowed to let renewables compete and lower the cost of clean energy.

To incentivize other countries to do the same, Hansen said, the US would have to impose equivalent tariffs on imports from countries without a carbon fee.

“It would take a few decades,” said Hansen. “But you could rapidly phase down emissions.”

Michael Oppenheimer, professor of Geosciences and International Affairs at Princeton University, who advised the Clinton campaign informally on its energy proposal, said the solar plan has to be part of a larger scheme to “crack the back of fossil fuels”.

Oppenheimer took issue with Hansen’s climate change paper in the Washington Post last week for lacking specifics on how rapidly sea levels would rise, but he said there’s no doubt “humanity better get its collective foot off the accelerator”.

Oppenheimer, a longtime participant in the Intergovernmental Panel on Climate Change, said a combination of a strong set of incentives like solar credits have to be supported by regulation: “Just as a solar program, it is very good and it is ambitious. If you look at the bigger picture – which is, what are we going to do on the whole about fossil fuels and reducing and eliminating eventually our dependence on them? – that’s a larger question.

“What we don’t have here yet is what is the regulatory scheme going beyond the Obama scheme,” said Oppenheimer. “In fact, we’re going to have to accelerate the downward track if we’re going to beat the climate problem.

“That discussion needs to be engaged – and engaged quickly. I hope it’s engaged during the campaign.”

Bernie Sanders is so far the only prominent political candidate to oppose the oil pipeline Keystone XL, but he has yet to present an official energy proposal to address climate change.

The candidate to keep us from 2C warming? “That candidate has not yet appeared,” said Hansen.