Posted by joeycello on Monday, 12 September 2016 in Environmental Heroes 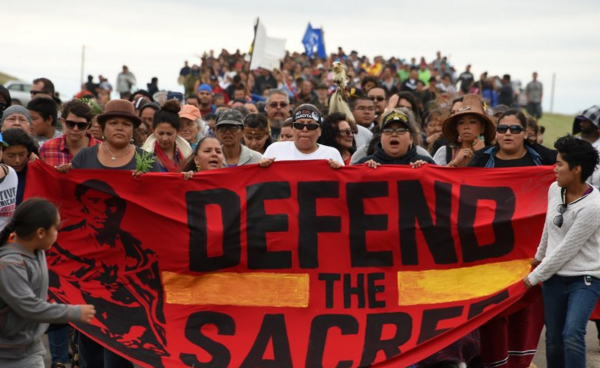 Thousands of Americans continued to protest in North Dakota Saturday to demand the federal government stop the construction of an oil pipeline near Native American land. The Department of Justice is currently reviewing the case after a federal judge denied the tribes’ request to stop construction on Friday.

Many protesters wore face paint and feather headdresses as they rallied and chanted against the Dakota Access Pipeline. The proposed route of the pipeline approaches the Standing Rock Sioux reservation, and the tribe argues the pipeline would disturb sacred sites and could contaminate drinking water.

One teepee in a packed parking lot in Cannon Ball, North Dakota, bore hundreds of signatures and handwritten messages of hope and encouragement.

“Honor our treaties,” one message read. “Water not oil,” read another.

The $3.8 billion project would carry 500,000 barrels of crude oil per day from North Dakota to Illinois across 1,172 miles and cross under Lake Oahe.

On Friday, the U.S. departments of Justice, the Interior and the Army announced some relief by declaring a voluntary pause on all construction within 20 miles of the lake.