Posted by Wolf on Thursday, 03 November 2016 in Environmental Heroes

Here’s What You Should Know About The Dakota Pipeline Protest 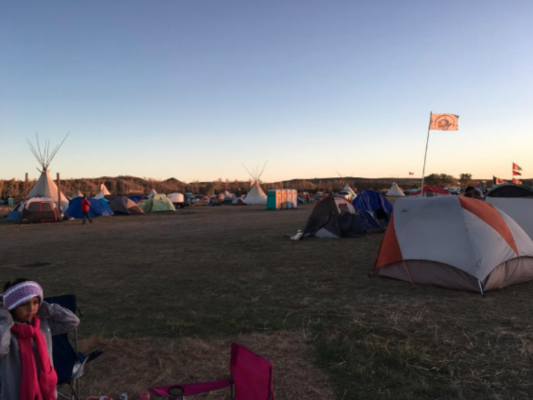 It's in no way over. Protestors settle in for a long winter.

As of Wednesday, over 1.6 million people had “checked in” via Facebook at the reservation in an act of solidarity with Standing Rock Sioux tribe members and other supporters who for months have been protesting the construction of an oil pipeline being built by Energy Transfer Partners to transport oil 1,200 miles east, from North Dakota’s Bakken field to a refinery in central Illinois.

The protesters, who include representatives of more than 200 other tribes, identify themselves as “water protectors” and contend that the pipeline would disturb sacred lands and burial grounds and would likely harm the Missouri River, which provides the tribe’s drinking water.

Early Monday, Facebook users began checking in at Standing Rock and reposting a message claiming that the check-ins were needed to help protect protesters in North Dakota from being monitored through the use of geotagging by law enforcement.

The Morton County Sheriff’s Office says the geotagging accusation is “absolutely false.” Leaders from the protest camp told Snopes they were not responsible for the social media plea and doubted its effectiveness against social media monitoring, though they appreciated the act of solidarity.

Given the surge of interest in the ongoing pipeline protests and the spread of misinformation on them, let’s review how we got here and separate fact from fiction:

When and why did the protests start?

The Standing Rock Sioux tribe has led the protest effort against the pipeline. In its lawsuit naming the U.S. Army Corps of Engineers, which approved permits to allow the pipeline to cross the Missouri River, the tribe cited a “high risk that culturally and historically significant sites will be damaged or destroyed” and its fear for the safety of its drinking water supply. The tribe asked for a temporary injunction against construction.

A federal judge denied the injunction in early September, though the Department of Justice, the Army and the Department of the Interior moved the same day to halt construction within 20 miles of “Army Corps land bordering or under Lake Oahe” while the case remains under federal review. The agencies have not commented on the pipeline since then.

Who exactly is protesting?

Protesters from the Standing Rock Sioux tribe have been joined by supporters from other tribes and many non-Native American allies, both at the protest camp in North Dakota and in solidarity demonstrations throughout the world. Actor Mark Ruffalo and civil rights leader the Rev. Jesse Jackson also joined protesters at the reservation last week.

Other high-profile supporters, including actress Shailene Woodley, reporter Amy Goodman and documentary filmmaker Deia Schlosberg, have either been arrested or faced charges for participating in or documenting the demonstrations.

What do the protesters want exactly?

The protesters want to see construction of the pipeline halted entirely and its route changed. They point to a rising number of pipeline accidents in recent years as evidence that they are right to be concerned about the safety of their water source.

“These pipelines are often seeping or leaking in small places, and we don’t have any way to detect them,” Doug Hayes, a staff attorney at the Sierra Club, told The Huffington Post in September. “These are the types of concerns the tribes have, and they’re, frankly, very well-founded.”

Such concerns were part of the reason why the pipeline’s original route, which passed near Bismarck, the state’s capital, was abandoned.

The tribe and its supporters also believe they were not properly consulted concerning the project’s effect on sacred sites and burial grounds. 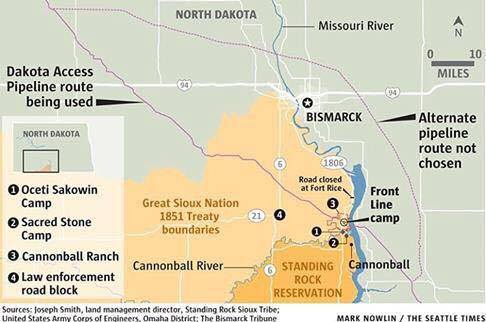 Actually it's on unceded treaty land. Land that is held by force by the US in violation of international law. #NoDAPL

What does the pipeline developer say about that?

How are local authorities treating the protesters?

Just over 400 arrests have taken place at the pipeline construction site since the protests began. The arrests have typically been on charges such as criminal trespassing and engaging in a riot.

Last Thursday alone, 141 protesters were arrested when authorities cleared a new front-line camp that blocked the pipeline path, on land owned by the pipeline developer. The protesters, however, claimed eminent domain to the land under the 1851 Treaty of Fort Laramie with the Sioux.

The show of force prompted Amnesty International to send a team of observers to monitor how law enforcement is handling the protests. A United Nations group is also investigating the tribe’s allegations that law enforcement is using excessive force and committing other human rights violations.