Posted by plantitfilm on Wednesday, 19 October 2016 in Sustainable Development

200 Nations Just Signed a Global Climate Agreement, But What Does That Mean? 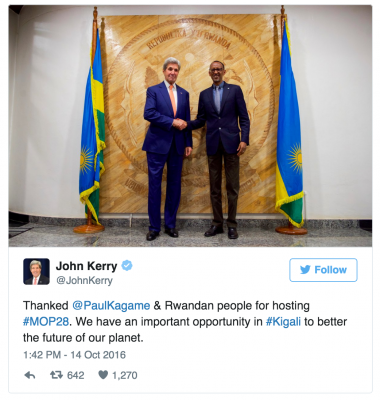 Nearly 200 nations have reached a deal to limit the use of greenhouse gasses in a major effort to fight climate change.

The agreement announced Saturday morning caps and reduces the use of hydrofluorocarbons, or HFCs, in a gradual process beginning in 2019.

Experts say cutting HFCs is the fastest way to reduce global warming. The United States, the world's second-worst polluter, is among the countries that want to quickly phase out the use of HFCs, and now it is bound to take the earliest action, starting by 2019.

Here's a look at what it all means.

How We Got Here: The Ozone Layer

In 1987, countries alarmed by the discovery of a huge hole in the ozone layer over Antarctica signed a treaty known as the Montreal Protocol to eventually end the use of chlorofluorocarbons, which at the time were used in refrigerators and aerosols such as hair spray. HFCs were introduced to replace them, and scientists realized only later that while they don't harm the ozone layer, they have a strong effect on global warming. Their ability to trap the heat radiating off the Earth is hundreds or thousands of times more potent than that of carbon dioxide. HFCs, which are used in air conditioners, refrigerators and insulating foams, have become the latest target as the world tries to reduce global warming. They have been called the world's fastest-growing climate pollutants, though less plentiful than carbon dioxide, as more people in developing countries buy appliances.

Who Wanted What, and When

The U.N. Environment Program has said that reducing HFCs under an extension of the Montreal Protocol could reduce global warming by a half-degree Celsius by the end of this century. Environmental groups came into the global meeting in Kigali, Rwanda, saying the step was essential to meeting the goals of the Paris Agreement on climate change, which was reached last year. The U.S., with Secretary of State John Kerry leading the delegation, was among the countries pushing for action within the next five years. China, the world's top polluter, was among the countries aiming at the middle of the next decade. India, the world's third-worst polluter, preferred as late as 2031, saying it needed time for its economy to grow.

A Sleepless Night and a Deal

Not long after midnight Saturday, environmental groups said a deal had taken shape, but it took hours for countries to haggle every piece into place. The new agreement caps and reduces the use of HFCs in a gradual process. It begins by 2019 with action by developed countries including the United States. More than 100 developing countries, including China, will start taking action by 2024, when their HFC consumption levels should peak and start heading down. A small group of countries including India, Pakistan and some Gulf states secured a later start in 2028.